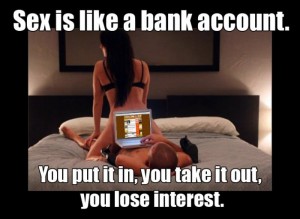 In the first one, what is interesting it is to notice once more time that the girls flake with shitty excuses even if they do want to have sex with you. Brakes are plenty but most will not assume and will prefer to say some shit: fear, shame, social pressure, etc. Needs to know how to put things in perspective, to don’t but it, but it is really a pain in the ass… For example there, they talked during 4 months on Facebook before meeting up. Hold on !

Then, when I read that the girl says she doesn’t remember any more where she lives, that tempts me to jump totally naked from the first floor window… Worse: knowing very well that she is going to have sex with Padawan, she refuses that he makes her a massage…. Why complicating things for the pleasure like that with no purpose? For us either it is not easy then women should not add some difficulties. Needs to know that we want and to be coherent in life!

In brief, the WWM is in my opinion a part of things to do in the life of a curious sexual man if we want a complete formation. I briefed him before in the sauna and I let you read the result now (yeah, I am a good buddy – sexually generous sometimes against my will).

The use he makes of my method of online pickup makes me proud. But knowing well the proverb “fais du bien à Bertrand, il te le rend en caguant (be nice with Bertrand, he will pay you back with his shit)” I am a little scared now he tried almost everything. Time will tell !

May the God of the Game be with us ! Fuck in peace, you have my blessing !

Do you remember the “bet” I had made with Fabrice? You know, we had both approached the same Corsican girl on Adopt and he wanted to see who was going to bang her like a warrior the first one !

Well, I lost the bet (there was no issue at the same time). But the scamp continued to speak to me on Facebook. I think that what tempted her was to know about the 3/4somes. She absolutely wants to try thus it is cool! Needs to see if she gets cold feet the D-day.

I thus suggest her to fuck just the two of us first. The cutie is a player and she wants to manipulate me as an AFC. She very quickly realized that it was not possible.

The moment comes : we have to make an appointment (after many Facebook talks to warm up) and it is that at this moment that it becomes a little more difficult: she simply chicken out. Between her phony excuses and the moments when I was not available, it was difficult to find a date!

It will be necessary to explain me: I finished by taking her number and finally she flakes me, or says she is unfit to fuck because she drank heavily the day before… really poignant ! Other mythical flake, “not tonight, I am drunk, I forgot my address“. I told her that I would not insist ! (All this with text messages).

A few days later, I like one of her statuses about her long weekend to come. She suggests me meeting up the following Sunday evening! I then provoke her even more by telling her that she has just a big mouth but nothing in the panties. But the meeting is fixed to Sunday at 9 pm…

I really wanted to flake her in my turn to punish her, finally well I found another way for that!
I arrived at 10:10 pm instead of 9pm (I had a rehearsal with my group before and it is the priority I’m a busy man!). I had an anthology of messages, she was put under stress the poor girl! Like that :

Honestly it was more caresses on the back than a massage but it is always good to take. I suggested making her one too, by telling her that I would mass all her body. She refused… will need to explain to me, she probably doesn’t assume herself. I thus began to warm her to death without kissing her. I guess that I could have fucked her without kissing her, but it will certainly be for the next one who will play the shameless.
Obviously we both eventually can’t handle more tension : she demanded my cock but I continued to lick her and to finger her. She still asked that I take her then I told her “if you want it, you will have to take care of it” by showing her my dick. She thus blowed me then we made a 69. A true beginner. I took her, she came twice by jumping on me. She of course was entitled to her doggy style with spanking! Then a lied down doggy style, she eventually wet all at once and that made me come.

When I left from her home it was 2:30 am, I totally lost track. She wants that we see again each other, I told her that next time I would come with a boyfriend or a girlfriend!

Sometimes you meet girls open-minded and not pain in the ass thanks to the (aggressive) game!
You know 6ft, and you know that this scamp is always ready for plans with more than 2 people!
I had told you that the Corsican of my last FR was interested in all this.

Last night, date with the two naughty girls at 6ft’s at about 10:30 pm. We begin to chat, the girls drink one or two glasses of alcohol to come free just a little.

6ft begin to settle on the bed, she was hungry the gourmand! I join her, I remove my shoes and I lie down on the stomach. She begins to touch my butt. And now the Corsican comes to do it in her turn. That began to totally turn me on! They take my top off. They certainly had to think that I was going to finish naked while they still would be dressed! Wrong! They might be in numeric superiority. I was not going to be passive!
I have the baton thus I am the conductor! Deal with it!

We continued to lick each others during I-do-not-know-how-long after that. Then she both looked at me in a naughty way to tell me that they wanted to go on to the next stage.

Alternately they come on me (andromaque – jumping on my cock), trying at all costs to make me come (Corsican had two orgasms under 6ft’s naughty eyes.) But I resisted and said to them : ” Did you think you could avoid doggy style ?!”.
They thus both had their doggy style. 6ft was eating the mattress.

I was dipped by my sweat and the cyprine, they eyed intently me from the bed. I went to take a cold shower. When I came back they started again sucking me together to make me come. But that did not work and I had an iron bar between the legs then I took another condom and show must go on! Andromaque again with 6ft then a spoon with Corsican which was transformed inverted andromaque after, while 6ft was licking my balls and while I was touching the clit of the Corsican.
I suddently came it was so awesome !

After orgasm, I felt my energy circulating in all my body, it was so good !

We discussed just a little after that. They are ready to do it again thus it’s great!
I left with the Corsican at about 3:30 am… The phenomenon of distortion of time being still very present…
Really good this 3some especially that it was the first experience like that for the Corsican.