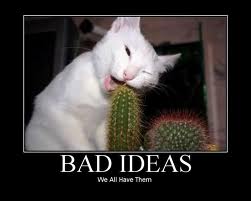 Do you know this nice little story written by Haruki Murakami?

Once upon a time a man and a woman made eye contact in the street and immediately felt something rare. They miraculously found the courage to speak to each other and spend very pleasant almost magical hours together. Everything was perfect except … they wanted to test the Destin, otherwise there would be no story.

So they thought that if they are really made for each other, Destiny that made them meet once will make them meet twice. They thus left each other with no way to get back in touch with the other, thinking that if they meet again by chance, then they will get married and live together for the rest of their days blah blahblah. Really a shitty idea, if you want my opinion,but well let’s say it’s cute.

So far, this is all very romantic … but reality catched up with them: they didn’t find each other again. Years went by and everyone took other lovers … They then met again in the street but unfortunately did not recognize. True story.

The morality is that love is hanging by a thread, you have to seize your chance. This is also on this premise that street pick up isbased : this girl will disappear forever in Aix’s streets unless you find the courage to speak to her, and then, maybe it will be the beginning of the story of awhile life (or even just one night which is already better than nothing when you know how life can be hard). Who knows ?

All that to say that I met THIS girl some time ago in a bar. It was truly symbiotic and reciprocal between us, we hardly could believe it, it was impressive. Much in common, troubling coincidences, etc.

That same night, we did not sleep together nor anything, saying to each other that if we met again, we put together in couple because it seemed to us too good to be true. Except that the city in which I live is not so big: so one day, we met again.

Except that when she saw me again, weeks later in a bar, well, you might say I had my tongue in the throat of another girl. “You’re really like the others …
– So will you forgive my behavior because I am a Man? Or did you expect I’m better than my peers?
– Both, I think. ”

The thing is that we slept together but it was crap. Well, it was not awesome from my point of view. She also slept elsewhere in the meantime : so they are always readyfor morality but the truth is men and women are equal. They’re maybe worse than us.

Indeed, she told me she had a boyfriend, but not with herone true love, and that it was better that way. Because even if we got along really well, she did not feel comfortable with another man the himin her bed. That perhaps simply afraid her after all, to get into something else.

I’ll call Hafid. Back on the field.For better or for worse. I prefer the worse, btw.