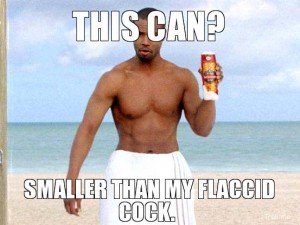 Well you know it, Fafou is a polite boy. Then to thank me for Friday evening, yesterday he introduced me to 6ft.

We had an appointment at the Chassdo because I wanted to hunt another girl.
Just before going, I fall on the Sardine on Adopt (an ex conquest of Fab he had banged while I took care of her friend in a birthday last year). Because I really had no time I propose her cash a 4some, a small extract :

Sardine : Oh no thanks you there’s nothing more boring! Are you hunting?

Me : Yeah baby I’m chasing ;) and I suppose you too ! are you interested in a foursome tonight ? (yeah I’m direct because it is tonight or never ^^)

Sardine : No I’m fine thank you

Me : I thought you were more kinky all the same… you can try to look innocent huh but every women have this fantasy. Have you already tried all at least ?

Sardine : Yeah several times that’s why I’m not that interested.

Me : Maybe it wasn’t good persons so…
You prefer twosomes now ^^

Sardine : Huh.. sorry Padawan I’m not a sportswoman, and I love beef. Do you understand

Me : Loooool
Yeah yeah I understand, it is for your friend and all this blah blah blah ^^

Sardine : Waaa not at all we don’t speak to each other anymore I fucked her ex! It’s sad but it’s life, and I love life too much

Me : Wah wah ! You make me have a lot of fun ^^ well she should learn how to have fun instead of doing bullshit like that all the time :)
Ah and not only blondes are welcomed, I just said that they were my type [on my profile] ! Don’t feel rejected love :)
Seriously come having fun tonight alala !

Sardine : No seriously tonight I’m busy and I didn’t sleep for 24h so I’d be bad

Sardine : No I’m going to bed now! I have a drink and that’s it. I say no to you from the beginning, I’m not looking for excuses I am not a young girl you know
Sent via iPhone

Me : You’re breaking my heart big sardine. It’s OK there will be people you know ;)

Sardine : Yeah I know that you and my sardine are always together

Me : Obviously ! More there will be sardines and more we’ll enjoy Frankly you have an opportunity to have fun but you are going to bed and will miss something, I thought that you loved life

Sardine : You make me laugh! Stop with your 2 sesteriums arguments I am a dead-walker, I love life, but it is not for a no that I am not credible anymore!

Well I didn’t see the last message, I was already gone. I thus met Fab and 6ft : I like her she is quite exciting ! We try to turn her on to incite her to go hunting, but over the moment I feel that the ant is not unselfish! She wants her two cocks just for her!

Fab went for a pee and we see him coming back 2 seconds later with guess who… this fucking Sardine ! This girl thus spent her evening in the Chassdo and was at the same time on Adopt… The height of the hypocrisy (she had sent her last message at midnight). The poor girl had got fat since last year and she had cut her hair…. huge mistake fat ass !
We all agreed that she wasn’t up to our expectations anymore !

So, we did nothing at the bar, 6ft didn’t want to share us, we thus went at her place. I found her apartment very nice, I like analyzing the apartments of people because we learn a lot on their personality. Well in any case she had tidied up well because she knew she was going be doggystyled violently!

We stick to her together, each on one side and we begin to undress her : her energy and her excitement rose.
We eventually arrived on the bed and we made a lot of oral sex, a real swallower of sabre! Her little mischievous eye contacts were very exciting! We switched, I stimulated her G-spot with my fingers, she couldn’t handle more, she twisted, I thus told Fab “Hold her !” and boom, she was blocked, she had to come ! Too good ! We did it several times and then I broke down.

While she was blowing Fab, I took care of her ass with a good violent doggy like I love doing it to naughty girls who deserve so !
At the moment I came, I took another condom and I restarted like if nothing had happened. She was folded on the bed, I do not know how long this moment lasted but I stopped because I got tired physically: I had doubled in volume because all my muscles was inflated because of the effort.

She continued sucking Fab, by lying face down. After a small rest I returned giving her some pleasure in lying down doggy-style. At this moment I felt that a strong energy surrounded the group, like if we flew away… the orgasm was powerful: at the beginning I was soft and then I had an excess of energy I would not know how to explain… I wanted to demolish something, a little bit like fury ! I thus did about twenty push-up to calm down and it worked…

6ft began riding Fab then he took her in lying down doggy-style, she was fucked hard while I caressed her.

We then rested, Fafou went back home, he needed some rest with all the sperm he sent this week ^^ (Bravo bro because it is necessary to have a lot motivation and desire after all these efforts;) )

When we had sex again in rather all the positions, she covered me with her cyprine up to the top of the navel, rather crazy and rare!

Finally I’m not even able to synthesize everything, there was really too many caresses, looks and pleasure ! I will especially remember that she had a lot of orgasms and enjoyed! Us too ! Thanks to Fab for having introduced me to a so generous and open-mined girl (maybe because she is 31?)

Otherwise tomorrow I will watch a movie with an English girl, I hope it will be good ! More adventures very soon probably :)

May the cyprine flow freely !

After the tae kwon do, I was so tired, but I motivated myself all the same to arrange this meeting for my buddy (after last night, I was flying, but you’ll see that I’ve quickly lost my energy). I was a little disappointed by the attitude of 6ft who did not even try to pick up with us. She even made opposition. Strange for a girl bisexual, hypersexual and used to orgy clubs. We had planned to make a foursome this weekend but that thus divided into two threesomes. I think that it is the approach anxiety that has stopped her but I had by far preferred to go hunting with The Girl of the Body Painting. 6ft is btw taller than 6ft because she is taller than Padawan. It was funny when we positioned, him in front of and me behind her, to touch her and undress her: I had the impression to besiege a castle-fort and to bring down a tower. Like Louis le Pieux. Then, we put her on the stake of sex like Jeanne d’Arc and we stoned to death her with cocks. All kidding aside.

During the act, I felt put aside, like if the fact that Padawan is a new cock for her justified that she had to oversell it in terms of attention and compliments. By making threesomes with two girls, I quickly understood that it is necessary to put them on an equal footing at the risk of putting one ill-at-ease. That gave me difficulties of erection all this, certainly because the girl lost her “purity” under my eyes… she did not excite me much. The bitterness disrupts a little my prose and my erections at the moment.

After sex, they began speaking about music metal both in a corner. Totally in their bubble. I was very bad, a strange sensation invaded me… A shitty thing looking like sadness. I said that I was not feeling good, that I was going to leave: they didn’t really care. Then, they had sex again without me. That also, I lived it badly. In this fucking plan, I really had the impression to be an intermediary whom they then egoistically kicked out to be quieter. For example, if a married guy grants a threesome with two guys to his wife, it is not so that the newcomer fucks his wife when he is not here… rules, priorities and a little of respect are all the same required otherwise it’s a mess. I thus want my future wife to be hot and pious. With a padlock transplanted to the entrance of her genitals, which key would be hidden in my pair of underpants.

Two words on his Game with the Sardine. Everything in the provocation… well, it can work. The only thing I didn’t like it is that he criticizes his ex. Otherwise, the logic of the princesses is always so funny : “I am not interested in men at the moment, nor in women, but I am registered on Adopt”. Or then “I will go to bed early tonight” and then we meet her in a club. The girl who got fat and adopted a haircut that doesn’t suit her plays the decider and refuses a plan with a beautiful girl and two guys she likes while she declared herself bisexual last year? So weird. There’s also the eternal logic “no I’m not a girl like that I’m not a slut” then when you provoke her “but I’ve already made several foursomes” for fear of being thought of as a coward. Why not more frankness and sincerity ? Read my ebooks for a better understanding…

Well. Let’s stay positive. 2 threesomes in 1 WE and 5 girls fucked in 3 days, not everyone can do that !!! I have to restore self-confidence, to armor against egoism and to get laid (no please not I can’t handle more) some sleep !