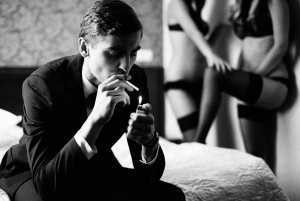 Sexual connection: what do I mean?

I do not speak here of the “emotional connection” that makes the girl feel good with you (comfort phase). I speak indeed of a “sexual connection”: this is the name I give to this indescribable thing that makes your body and hers getting along famously (or not).

I just searched the web but I have not found anything about it there. So either I am completely wrong or Google misguided me (on the chakras) or I will highlight something that the PUA community has missed so far. Whatever actually matters is that YOU become aware that IT exists.

Have you ever fucked a girl you barely know, but you could feel a fusion torque during sex? During the time your legs were in the air, it was the perfect arrangement like if both of you shared the same body.

To me, a very strong sexual connection approaches the passion and avoids that one gets bored in bed. It’s creates the fact that we all the time desire the other one. That you do not get tired despite his or her flaws.

Can we predict that we will have a good sexual connection?

I do not think you can predict in advance with who you will have a super sex session or not (I do not speak from a technical point of view). Sometimes I have been surprised : the girls on who I would not have bet, shy or virgin, but I had that je ne sais quoi that drove me crazy. That je ne sais quoi would also probably left another man marble.

I also sometimes fucked hot babes without wanting to see them again. This is not related to physical appearance. This is a need you feel or not (and not a lack of sex).

Is this sexual connection necessary to orgasms?

The sexual connection is not required to give chicks orgasms. It is not essential to have good sex either. But, it is essential for having a very awesome sex session and for wanting to fuck and fuck again and again the girl.

To give orgasms, a good technique, putting the girl at ease, or the only state of mind of the girl may be enough.

When these libertines sucked me it was good (better than a lost night watching TV) but there was not yet that little spark, that little extra something that makes that we could fuck all night without getting tired.

Are there other types of connections?

I think so. I’ve loved spending time (and sleeping) with girls with whom sex was not great. Yet the simple contact with their pussy and something was going on between us. I already had brain connections, neurotic connections, unhealthy connections, etc.

I also had outright sexual connections with girls with who I shared neither the lifestyle nor the opinions, nor anything at all … And yet, I have never regretted having done these experiments. I think we try too much to rationalize or analyzing sex. While these urges are stronger than us. Maybe are we just too scared to admit it? That chance is stronger than our will.

How to tell if you have a good sexual connection with the girl?

Talking is not enough. From experience, I have told you, I have often been surprised: great sex with almost unknown or seedy sex with a girl I dated three times before.

The thing is that a sexual connection can make you or her want to know the other person better after sleeping with him or her. Like, you don’t give a shit about her, you fuck her… and it’s so awesome in bed that you are seriously interested in the girl after.

I would say thanks to learning than by being more open rather than being defensive, you are more likely to experience powerful sexual connections (it must be that someone takes the first step). We could have with many people (we are made for that) but never with everyone. Chicks want to choose to whom they give power over them.

Is the sexual connection always reciprocal?

I do not think so. It happened I have loved fucking chicks that did not wish to see me again after. I have often been contacted again by girls because they had enjoyed it while on my side, I did not want to do it again with them. Ultimately, I was glad to have done a good deed for them but I did not want to see them again. No matter how hot they were or how they were invested in bed… It may seem unfair, I realize, but it’s like that.

I think there are energies circulating among humans, “good chemistry” some people say. Well, these connections may exist only on a sexual level. But the best is when there is ALSO a brain connection.

Where are the sexual connections coming from ?

I often wondered and the truth is that I don’t know. The universe? Past lives?

More rationally, I think there are factors that do not depend on us. I think it was Freud who said that similar neuroses attract. Then, there may be hormones in general and in particular pheromones that can also play a role here.

Does everyone know what that connection is?

Like I have said, a strong sexual connection seems indescribable: it looks like the obvious but remains inexplicable. I have serious trouble to ask over words so feel free to help me in the comments.

I think most people do not know it in their lives. Most people are, anyway, committed in by default relations. They sometimes suffer more than they live a fulfilling relationship.

Most people know nothing about the art of sex, or it is never spontaneous, or it is mechanical or chaste, etc.

What is the interest to find a girl with whom there is a strong sexual connection?

First, I said that sexual connection may be there, but to varying degrees. But the best is when it is very strong. It seems to me the equivalent of those people who understand each other without having to talk.

Then I think you will understand when you will live it (do not confuse it with a one itis : sexual connection is something rare). That is when sex WITH HER will be irresistible for you.

I soon get tired of women in general. It is the novelty that excites me, motivates me. I happened I had regular girlfriends, who managed to drive me crazy even though they do not offer me this novelty anymore.

They always and spontaneously wanted to make me happy, and it was mutual.

They gave me priority over other men with whom sex necessarily lost a lot of attractions.

Science has proven that there is a clear link between the quality of sex and the level of interest of a woman for a man, the hormones released by the brain after orgasm are also those that induce the feeling of love .

When I started, I was in couple just to be a couple. I fucked with chicks I dreamed cheating on because… I was hard mechanically and not by genuine desire for HER. I had experienced nothing yet and I believed I was arrived.

“All I know is that I know nothing.” Socrates

previousWhy relativizing the religion of the condom ?
next10 details for selecting my targets on Adopt