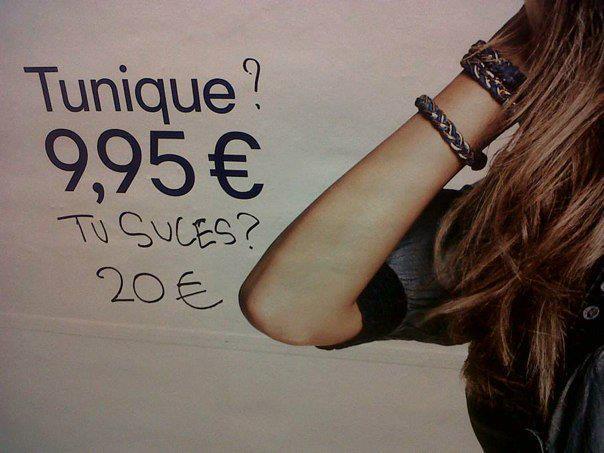 Flashback: not last Sunday but the one before, I was hanging out with The Teacher.

I took the opportunity to take her cell phone and send a message to The Russian. The Russian is a cute girl who started sucking a buddy after a student party but this asshole fell asleep during the action (he was too drunk). She did not like it so do not want to see him again: that’s why he gave me her Facebook. The challenge was to contact her without she understands that I know him (because she is yet thought of as a whore in her university).

Except that around 4:30 pm last night, 4 hours before the France-Russia match, we received a cold shower: “Hi! I’m not sure I can come…”

Then: “I really want to, the problem is that maybe I read too many stories of girls who were killed, I’m suspicious. Or paranoid.”

I first foolishly thought it was a shit-test. So, to reassure her, I scanned my identity card, my work contract and I even told her my blood type. I also suggested her telling a girlfriend where she was going so she could call the police if needed. In short, it is true that it is important to be prudent, but if you are too cautious you never do anything in your life for fear of living it.

The truth is that nothing could be done. I contacted another friend that we have in common to tell her that he knows me and I’m normal, he did it without asking too many questions (thank you bro). But all that this bitch has found to answer is: “Hi, thank you for telling me that, but it changes nothing.”

I insisted a little bit, out of spite, but she started to assault me ​​by saying that I am an ass because I insist and everything. It is easy to return the situation anyway and pretending to be a victim… I was doing this for her own good too, to make her think but it only served to block her. In short, like that, the chicks who have no guts cannot live ordinary things. It is the principle of comfort zone that applies. But basically, they do not deserve these things because they do not have what it takes. Besides, I bought a good bottle of wine for the special occasion and she knew it. It’s a lack of respect. Fuck! Always choosing the ease won’t make you grow up…

The problem is that these chicks think they better know a guy picked up in a bar. Except that, the only difference is that they are drunk in the club : that’s why it does not stress them at the moment. They need to drink to have the guts to assume their cravings. But when you’re drunk, you’re forty times more vulnerable than when you’re sober. It’s good to take precautions, for sure, but there’s a moment when you have to go for it. She may have another opportunity in three years, who knows, I wish her the best. Or she will do it but with assholes and it will be bad.

So, instead of three happy people, we were three frustrated people. Nobody has won anything in this story. I was very angry yesterday because of the human bullshit, and I even pissed off The Teacher because it is communicative. Well, this morning I felt better and we fucked. But I was not really into it. All this because of a girl without any strength of character, without good judgment nor will. In short: a poor girl who did not deserve us nor to live a cool thing like that. And yet, it annoys me. Like what, life is unfait.

What else ? I had matched with a bitch on December 27(among many others) on Adopteunmec. She wrote me “hello, how are you? “And I had answered a bullshit but she had not bothered to feed the conversation.

So, I sent her the last chance message the other day… what made her wet! This time she gave me her FB. Then, 24 hours later, her phone number and photos on which she is less and less dressed… until she’s topless. She was very motivated.

She liked me, that little girl. She has a cute little face. Besides, she’s an accountant like me. She is 26 years old looks like 18. When she sends me texts, it’s funny, honest, assumed. Frankly, I liked it. So we planned a date this afternoon.

I went swimming and then I joined her. I was tired, but hey, I put drops in my eyes so it is not obvious. I was apprehensive about the date because I knew many fails lately. But it went better than expected: we had planned to have a drink in a bar next to my house, so when we passed in front of it I asked her “do you want to have a drink in the bar or do you want a drink at my place directly?
– at your home !”

Well, there was a coca that was hanging in my fridge for 3 months. I gave it to her. Me, I took a glass of water, it’s healthier. Then she said “we would be better on the bed, right?” In short, we kissed, then I licked her. First orgasm. « You’re a pretty good lover!
– thank you.
– It’s up to me now! » So she started sucking me and I suggested a 69 after a few minutes of fun. It was cool… except that at one point: she did not suck me anymore… I wondered if something was wrong but she suddenly had a very powerful orgasm. Again !

I ended up sending the puree in her pussy but I did not get soft, strangely. Her pussy is tight but super wet. Really very good. She is, moreover, really hot too. It is a pretty little blonde who speaks like a little girl but who fucks like a real bitch.

We fell asleep and a friend rang the doorbell. Fuck ! I had not seen the time: we had an appointment at 8.30 pm so that he gives me a document (thank you biddy). This is the plan of a seminar I am preparing. In short, I introduced them but she was looking for her panties so she was a little embarrassed. When he left he told me « sorry for having disturbed you with your Russian girl
– ah no, she is not Russian! » Awesome, this moment.

After eating, she wanted to do it again. To show me her desire, she began to make me deep throats. Then I took her again in doggy style, she was like crazy. “FUCK ME”, she ordered me. « I’m your little bitch! » She even wanted me to strangle her a little bit. “I can feel you it’s so good!” She again came twice in this position. It was her party!

Before she left, she told me that she found me beautiful, that I am a good lover and that I am the perfect sexfriend. That’s good for my ego. In addition, the Russian has answered on Facebook in the meantime. I had written a message to apologize for being a bit insistent and she said she also wanted us to sleep together but that we don’t enough know each other yet. I proposed a date next weekend, we will see (but it will be his last chance).

May the God of the Game protect me from AIDS and all other shits like that !

previousHow to become freer and happier?
nextThis afternoon, I took the virginity of a girl