She was practicing pole dance 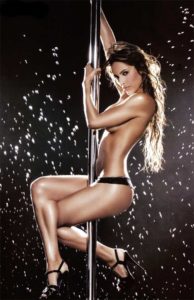 Yesterday, for the first time in 2016, I missed my training at the pool. My shitty excuse : I had the visit of my parents, and as I could only see them in the evenings after work, I went to bed late all week. I was really tired around 7pm, so I fell asleep reading the Scrooge comics I had for my birthday. I chose to take care of myself, especially since I knew that I would probably receive a visit at 9pm.

Punctual, the girl wrote me a text message at 9:03 pm “I am downstairs”. Her name is Mélanie… I collect them seriously, it is at least the 3rd or the 4th Melanie I have fucked since I am in the Lyon (the country of 69). She’s a salesperson in a drugstore, it made me laugh… she works in the kitchen products area. Her boss must be a little macho!

I matched with this pretty little brunette of 24 years on Tinder, January 16, so there is more than a month (it’s so long). She had a super sexy photo where she was at the seaside, on the beach, in a black dress with her heels in her hand. I opened with « It looks like a morning on the beach after a party lol. » She was not very talkative, so to put her at ease I added « Well, I do not know if it’s the photo or you but there is something hot in there! ;) »

This girl would have driven crazy all the needies of the community: she answered every 3/4 days and refused to tell me about her underwear when I was trying a direct sexualization. But despite that, she was cool, and there was a kind of feeling between her and me that passed through our respective phones. What got me the hardest was when she told me she was practicing pole dance. I immediately imagined her playing with this fucking phallic bar between her thighs and it seduced me. I finally sexualized by proposing a massage with essential oils to relax after sport. She said she was interested…

It was then kinda easy to get the date: on February 1st, I sent “do you still want us to meet up?” Implying that she wanted us to see each other before but nothing proved that to me. She answered “yes”, quite simply. But the thing is that we had trouble finding a day free, so we switched from the app to the text messages. She did not respond much faster. In fact, sometimes she answered quickly, sometimes she answered 24 hours after.

Last week, she was unavailable. So, to do not put pressure on her, I replied « we are not in a hurry, and you will be more trained for pole dance like that… do you prefer Thursday or next Friday? » To warm me even more, she told me being a hostess at the stadium for the match of Lyon on Sunday. Then she chose Thursday. So yesterday…

Well, when she arrived, I was not sure if she had understood that I was going to fuck her or if she was totally ingenuous. On what foot dancing? The question is not interesting for me, I do not like dancing. We had not talked much about sex in fact, the only real sexualization I put in my interaction was « did you choose the underwear you are going to wear tonight (this is an important detail) ?
– I have not thought about it yet ». That said, she had put sexy clothes and boots, in short she was well dressed. I offered her something to drink, she said, “What you got is fine.” It changed from the bitch I received last week, that one was graceful. I served a fruit juice on the table in my kitchen but she sat on the bed. Hmm, I liked this direct side! She said she found Leo (my stuffed toy) cute. One point for her!

So I went next to her. Leaving casually my knee glued to hers. The contact did not displease her. We spoke in socialization mode for half an hour. Then I put the interaction on a more sensual frame by stroking her arm, thigh, belly… finally her face. She kissed me. She has not been able to endure more sexual tension than me: for the punishment, she will endure my cock.

We undressed (but politely). I fingered her, she shook me (she jerked me off well). Once in underwear, I went down to lick her. When it became too good for her, she begged me to “stop” and everything but I did not stop. I was not born from the last rain. She came very high. At one point I had a doubt and she did not react anymore so I asked her « did you come yet?
– what?
– Did you have your orgasm?
– hmm I do not know but you’re very good. » So I learned that she had never experienced orgasm.

I went back there to see if she would go back in the pleasure, and that was the case. So she had not enjoyed with me yet. When she finally exulted, thanks to my licks on her clit and my fingers on her G-spot : I felt it, it was obvious, the shaking ran through her body and everything then she was inert for a few minutes before telling me “I did not do anything for you yet, but you killed me…” I showed her the puddle she left on my new sheets, and she had a hard time believing it.

She started sucking me to thank me. She had blamed a little herself for not doing anything to me but enjoying like crazy. Frankly: she jerked well but I did not feel much when she sucked me. And when she licked my cock with her little tongue, it hurt me a little so much I was excited. Single for only a year, I guess she did not have accumulated many hours of road, or she went on not difficult roads.

I finally fucked her in missionary, although I would not have been against a little doggy because she has a good little firm ass. The condom allowed me to last a bit more than a quarter of an hour despite my excitement. I warned her that I would not last long in that stade and she replied nicely « it’s not time that matter
– a little bit in fact. » The only downside (except that she does not suck like a queen) is that she wanted to keep her bra all along (small complex ? It gave her a touching side). But I liked to penetrate her by kissing her, it had a cute and sweet side even if I fucked her hard at a moment. She kisses well, her little tongue played with mine very well.

Then, she put herself in my arms, lying next to me, we talked a little but it was already time for the last subway. She tested me before leaving to find out if I was one of those “romantics” who absolutely wanted to get married after sleeping with a girl and was reassured when I told her I do not think too much. I walked her back to the elevator, naked, in the corridor of my building. It made her laugh. By the way, her underwear was blue finally, and it was fine on her Mediterranean skin.

She has a lot of charm with her big green eyes, this cutie, I was glad to have fucked her. Like the beautiful blonde of last week. Besides, I preferred to leave her in the realm of good memories (with many others. Thanks to the Game) rather than to call her back and taking the risk of erasing the magic of this awesome moment engraved in my memory).

As for tonight, a quadruple choice is offered to me:
– going out with my friends;
– sleeping alone;
– spending the night with The Teacher;
– going to the evening where invited me the pretty artist that I fucked in December (the one who had drawn Leo). She receives one of her friends at this moment, the one with whom she has made a threesome for the new year, and invites me to her house to “discuss”. The problem is that as much as I am fan of the eyes Natacha, as much her girlfriend looks not awesome to me (but we can have a good time even without fucking but it is all the same something important). Since I only have one fuckclose left to go, will I wait for a girl or an extra situation and wait long or continue as if nothing until I finished what I wanted to do…?

Should it be a fine final or a to be continued?

You opinion, God of the Game ?