Tell me, didn’t we sleep together last week? 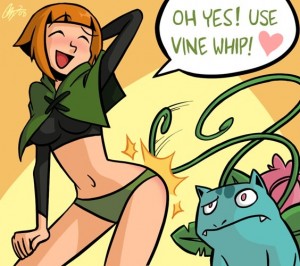 On Wednesday, I had a virtual walk in the herbs of Pallet-Adoptaguy-Town when I suddenly saw, fidgeting in tall grass, the profile of a young inhabitant of Aix, unknown in my sexo-pokédex (one of the most prominent quality on the Provençal territory). Her first name was enough to make me damn hard because it is the same than a wild hottie from Nice who was in my class a few years ago. Hey no, naughty boys, when I talk about a hottie inhabitant of Nice, I do not speak necessarily about the one who has a calendar in her name.

In brief, a little disrubted by the beautiful, I took out my pokésex with the same dexterity than a Ash full of ecstasy.

The specie of the inhabitants of Aix, it’s this kind of girls who are a little bit haughty because full of money but well-dressed (for the same reason). At the age of 5, they are shitty curbed babes. At the age of 18, they never go to school because will take over dad’s business, have the face burned by their 7 weekly sessions of ultraviolet and go out only in a certain very expensive club of the city center to drink in one go magnums of champagne that cost 2000€ (big blues in front of my bank statement at the moment). For an average guy like me, we can only count on Jean-Claude Dusse’s misunderstanding to make out with them (no cash, not going to the private high school, does not work as a waiter in the aforementioned box – if it was the case they would want to be destroyed in the crappers and even would come demanding their owed spontaneously). Or on our gift to cunnilingus or on our electric tail like Pikachu. This girl has a peculiarity, she is a friend of the girl of the ice cubes, for those who have read my first diary. Yes, it’s a small world in Aix, just like Tyrion.

With no time to spare, I took out an on-line Poké Ball. Roughly my quite excited fingers started typing alone the keyboard the first bullshit that came into my mind (I maybe need to see an exorcist). “Tell me, didn’t we sleep together last week?
– Ah yeah, asshole, you never called me back.
– Sorry I’ve been busy, btw your friend was very nice too. Did you recover from your 6 orgasms yet?
– Yes I will tell her, your buddy was awesome too. Yeah I’m hardly recovering from it.
– We should do this more often then. Your place or mine ?
– It is a little early for that.” Then here we are, one thing leading to another, I used some speed-seduction on her (turning her on thanks to NLP) : what had the effect of exciting her to death. She made me dream when she answered “I went out of the shower, I read your message, I had to go back taking a cold shower”. And she concluded “Well, you can invite me all the same to have a drink at your home and we will see
– OK wear your magic underwear then.
– Magic, magic, they are going not to go on the floor on their own all the same;)”. Seriously, I realize that I a little picked her up like even Chuck Bass would not dare to approach a groupie at 4 am in the morning. I’m kinda proud of it !

Last year, I a little abandoned speed-séduction for the benefit of fast-séduction (aggressive pickup, sex within one hour) but I realize that both are complementary. More details about these methods to make the girls directly come to your place in Secrets for seducing on the Internet.

Well, RDV yesterday, Friday @ 9pm, In front of Cézanne’s statue in Aix (it is her who proposed the place, she probably just wanted to check if I was fuckable before coming to my place). I received a message at 8:55pm “I’m gonna be 10 minutes late
– Damned, is it the time already ?!” I cut my nails, cropped the beard and washed hair as a matter of urgency and in cold water (my water heater is broken, fuxelife) then I went there. We arrived more or less at the same time. Great! I hoped that we would still be that synchronized once at my place. She gave a kiss to me by sticking against me and everything. I thus sexualized, told her to hold my hat in the elevator, she asked why, I answered her that it was to have free hands to fiddle with her. A spanking followed. Finally here we are, easy-going atmosphere, it is cool. I pleaded that my roomy had to sleep to bring her directly in my bedroom “ah it is the first time I am in the bedroom of a guy within 3 minutes. By the way your approach is awesome, it feels like we’ve already slept together in fact”. She said having no social pressure and being a player. Yummy. She had brought a bottle of I-don’t-know-what-but-it-was-alcoholized (well-bred, cool, I had nothing to offer to her so it was a good idea) then we had a drink there.

Well, she wanted to put some music and we made gymnastics love, 3 times I guess. She opened the window and the shutters, I believe that she wanted to be seen, it is maybe her small exhib side. In brief, it was sports: we broke a lamp and a glass. She has attractive tits that hold very straight : I looked under them, no scar, they were true. I also licked her and she greeted the performance by saying “usually a guy cannot make me come like that the first time we see each other”. Finally here we are, it is at 3 am in the morning that we both gave up. I planned to sleep the sleep of the just but not, she turned in the chamber until 5 am. Such a girl : I remove make-up, I am going to drink, I go for a pee, when I am in the bed I flounder. Seriously, at this hour, even Steve Aoki, he sleeps! That a little pissed me off but well on the other hand I was very happy that she came over.

As a result, I was a little dying during tae kwon do this afternoon but it was worth it. I like this sport but it totally drains me (sometimes our sessions last 4 hours). So, not too much modjo to go out picking up women after. Moreover, that reminds me, by undressing me she made a remark that flogged me a firm erection, something like “do you lift your heavy weights ?
– Yes why ?
– I can tell.
– Thanks.
– I love your canine, you remind me a vampire, I find it too sexy.
– Thanks.
– Play for me with your guitar…
– No.
– Why is it just here to look pretty ?
– Yeah exactly.” If she knew that in fact it is really the case and that I do not know how to play guitar…

I get the impression that she wants me to visit her at home one day or another. Why not, I love luxurious villas. Finally here we are, I caught a new Pokéchick. I am going to send her to professor Oak so he studies her and I hope that he will offer me a badge to greet my performance.

Anyway, I will not be a virgin of January and “I want to be the very best, like no one ever was“. Next step : Teaching frenchkiss to Martine Aubry (just kidding).