Street pick-up : taking her phone number or giving yours? 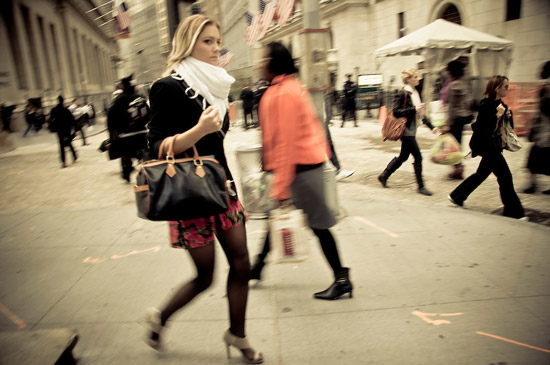 There are two schools concerning phone numbers: those who take them and those who give them.

Most pick-up artists advise to take the number of the girls because it allows to keep control on the timing (for example, when you’ll recontact the girl), and so on. But, by doing this, you take the risk of ending up sending texts to an old pervert with a mustache because a bitch may find it funny to give a wrong number (there are chicks that have no respect for your courage and  do not respect the players…)

Giving one’s number, on the contrary, makes it possible to see if the girl is motivated enough to call, so it allows sorting and avoids wasting time. On the other hand, it can make lose some girls who would be interested but who have not enough imagination or who do not have the balls to send the first message (would you be interested in such a girl?) Another problem when you give your number to many girls is that when they call back, it is hard to know who is who (fortunately sometimes by typing the number in the Facebook search bar, you can find to whom it corresponds).

The compromise that I like to do is to make sure that when I give my number to the girl I say something like “give me your phone so that I type my number” and then I make it sound. The result is that I also have her number that appears on my phone… and so I’m sure it’s a real number!

I prove in the following video that the girls to whom I give my number call me back :

Then, you know, there’s nothing absolute in pick-up… a given number just like a taken number can allow you to fuck. It depends on its solidity, the motivation of the girl and your phone game. A taken or a given Facebook may also give good results. Just like an instant date!

You have to accept that there are things you do not have control over (it makes you feel more free).

Maybe you’re going to take 50 numbers and you’ll fuck nobody… then the next day you’ll get one number and fuck the girl.

Finally, we do not always have the same energy, the same mojo, the same success (it’s like the best soccer teams: the best in Europe can lose matches sometimes). It depends on the days, sometimes you can be a God and the next day a shit… that’s the reality of the field : that’s why it’s useless to become big-headed when you take numbers or when you fuck chicks.

Let’s keep our feet on the ground.

And, whatever happens, the God of the game expects from us that we persevere, that we never give up !!!

Be courageous, my friends.

previousI almost fainted when I saw her tits !
nextA hot girl coming from the islands

We show you 3 openers that work everytime (in French) ! And we get the numbers… Feat. Kent ! Get 2 Free Ebooks !Let me…

Opening of my e-shop : find out my secrets !

Today is an important day for me because I’m really sharing my work with the world from now on. Find out my international e-shop :…

Read More »Opening of my e-shop : find out my secrets !

Teaser : Diary of a French PUA

Get 2 Free Ebooks !Let me send you for free my ebooks “How to sexualize your conversations with unknown women” and “How and why to…