A symmetry in the French kisses is something important 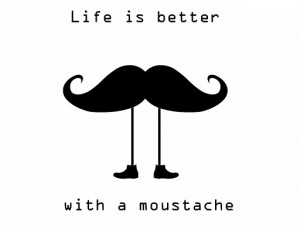 I came back from a club: it was awesome! Everything began with a game of alcohol that I lost (yeah it happens sometimes to me). I had challenged Hafid and Arnaud (both against me) and they won, suckers ! Besides, at the end I was so high that this traitor called Arnaud put some water into his glass and persuaded me that it was some vodka then as an idiot I thought that he also drank but I was the only one to have a hard time.

It is yucky the water, I once drank it, I vomited. That rusts. In brief, I lost and my punition was the most terrible, I had to shave this beard of 2mm which I maintain with love since the Final year of high school and which lets think to the girls (wrongly fuck) that I have iberian origins. In fact, I did not totally erase it of my face, because they imposed me to keep a MUSTACHE and to approach the girls by asking them « are you excited by men with a moustache? ».

The from now famous mustache of Cyprineman which inspired so much questioning: is the mustache reserved for most than 60 years ? is it OK to have it with a Lacoste and 2 TN somewhere else that in the ghetto ? isn’t it especially a gays’ thing at present? do women LOVE mustaches ?

I needed time but I did not too much cut myself : an exploit with about 3 grams + 2 joints and the result was rather like the Village People. Arnaud fell asleep like a wild Snorlax on my sofa then we locked him into the apartment by leaving … Then, my faithful and brave journeyman Hafid and I, we went in a small dark club of the city center. Anytime soon on the dancefloor, he was approached by the buttocks of a naughty girls who came dancing casually ass against him. I see a typically feminine attempt of approach there, hear there that if the guy likes her, he will try to pick her up ; and if he does not like him, she will pretend that she did not deliberately maneuver her ass with this backwards step (they are smart in the gang of the devourers of apples). My buddy had the good idea to make her turn around and to kiss her without hesitation (THIS IS A MAN).

Her friend thus was bored, dancing alone, a little lost. I approached her and said « My buddy is kissing your friend, we can do the same thing to create a shape of a symmetry like the Ying and the Yang. » We spent the next hour kissing against a wall girls that we did not know ten minutes earlier (a symmetry in the French kisses is something important). At the moment, I looked at the face of my buddy and noticed that he seemed to enjoy then I had a look at the hands of his darling who was giving him a discreet handjob. I thus decreed to mine that I also wanted one. Not easy to mime that, with sign language, but I did it rather well, by using the universal sexual language. I thus was masturbated a little and put her some fingers, after she nevertheless negotiated a few minutes, for the principle. It is at this moment that the story became downright crazy !

I began to inform in a telepathic way to my team-mate that it would be funny to exchange our conquests. I prefer to present the girls with a fait accompli then simply, we caught them by shoulders and exchanged them. Mine seemed reluctant at the idea of spraining her wrist longer but the most important, it is that the other girl was hungry. Very hungry (to reward her, I also touched her) ! To don’t come too fast I had to think of Arnaud who was besmirching some vodka on my pillows. Here is thus the story of how we were masturbated discreetly in a club by two friends. One of the girls made me the pleasant remark that I was a dead man of hunger. I assumed. Moreover, she came alone to the conclusion that she also was one. She also told me that what excited her, it is that we were unknowns and that we would probably never see again each other.

Do you know what is also pleasant in such situation? It is the face of all the guys all around who also came to pick up but who are going home alone. All this makes me think about the power of the alcohol on a drunk chick. We should thank Poliakov and the other brands of Vodka ! I shall send them a card of wishes for Christmas. Unless I forget… Yes, it is highly likely that I forget in the meantime… What were we talking about btw ?

Ah yeah, I ejaculated in my boxer shorts and that stuck.

My party : free entrance for men with a moustache, minors and men in skin-tight dresses!

previousIt is cool to have a date on Valentine’s Day rather than a girl
nextHenriette is not your real first name all the same?