The attraction is natural and automatic 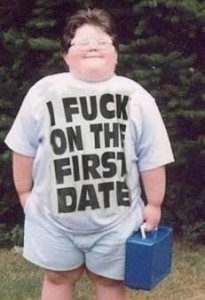 You are not special

The sexual attraction is based on automatic answers and is natural. In other words, there is not a lot of things to do, the sexual tension is underlying in every interaction.

There is always tension between a man and a woman. And by definition, this tension is sexual. She is hidden at the bottom of us, ready to come to surface. If it was acceptable, I am sure that, all around the world, people would sleep together without caring about the next day (« carpe diem »). We all would have of multiple partners. This tension is so powerful that it sometimes urges perfect strangers to make love after ten minutes of superfluous conversation. The existence of this attraction explains that some men oblige their women to wear a burka. This is also why women know that it is « dangerous » for them to put themselves in a situation where they are alone with you.

All what men need to excite a woman is:
– Using an attractive eye contact;
– Getting really close to her;
– Touching her.

Who is the man is not important. He can be you, or me, or even Brad Pitt. The only thing you need if you want to turn her on it’s the confidence to maintain her eye contact. That’s what is really attractive. Of course, if you are not very handsome, the woman can wonder what confers you such a boldness. But it does not necessarily mean that your penetrating look did not turned her on. She feels the butterflies at the bottom of her stomach. She is just testing you. « How do you dare trying to seduce me? We do not play in the same category, I am a hottie. » You lose if you let this kind of resistance intimidate you.

Most of the time, the simple fact of moving closer to her, will automatically create attraction between both of you. Something happens with your internal chemistries (pheromones, energies or whatever) and you interact the one on the other at an unconscious level. There is nothing you can say or do which is more important than that. She is intuitively going to feel that you have a connection and that something special is happening between you. Of course, you will also feel something : The sexual tension in the air. Her smell. The way she looks at you. You will just want to take her, right now. Here. Hic et nunc.

Doesn’t matter if you are a garbage man or the director of Carrefour, get closer. She can have the reflex to move back but it is because she smells some sexual tension and attraction for a guy who should not attract her. It scares her. The guys think that the girls who resist do not like them. So, they stop trying. It’s a mistake.

I first noticed this phenomenon when I was hanging out with women who did not attract me sexually (not my type) but always eventually touched me at one time or another (elevator, car, luck) and I felt this power of the attraction acting on me. For a moment, I wanted to fuck them then I regained self-control (with that said, if they had opened my pants I would have been passive). We can’t do anything about it.

Being touched or caressed is very pleasant. No matter who does it. Thus, touching a girl automatically creates attraction. Did a fat or ugly woman already give you a massage in the black, blindly ? It is pleasant as well. You may not want to admit it but it is the truth. So, when you touch her, she automatically feels good. No matter who you are, she may not appreciate you but she will feel good.

All this is Nature, biology, physics or whatever. You are not a God of the seduction because you had sex with two girls this week. Sometimes, I believed that I was too cool because when I got closer to a girl, she became nervous (in a good way) or because when I maintained her eye contact, she giggled while looking at me. I always thought that it was thanks to my talent, because I was A REAL SEDUCER.

But the truth is somewhere else. The truth is that the sexual tension was already present. This phenomenon occurs naturally between a man and a woman who get closer. It is the sexual opportunity which says that every person who is so close is there for a good reason. This magic feeling is the simple demonstration by which the nature makes you understand that something happens. It is an automatic answer. It’s not you, it’s not me, it’s not her… We are not so special, we are just human beings. But if you put one second your ego aside, you go to get that it is in fact a really good news!

If I had maintained her eye contact, had got closer to her and had caressed her: even your girlfriend would have felt a strong sexual connection with me. She may not admit it (it’s another story) But that would not mean that it did not exist. And if we were only both of us, well, you know the continuation… Don’t worry, she appreciates you as well. The thing it is that whoever can do the same thing. Even the worst loser, a lucky day.

You think that you are special because you excited this girl? Pff. This « magic connection» can arise between the same girl and any guy.

But few men will have the balls to maintain her eye contact, to get closer, to touch her … and everything very quickly. Most will wait for signs indicating that she is attracted before doing anything. The guys who are good with women are not so special, they simply act in a right way.

If you are neither big nor beautiful nor her type, you will be tested more than once. In fact, you will be tested more or less all the time until crossing the finishing line. When somebody tries to take out drawn paths and refuses to submit himself, he is mercilessly tested. The women are going to scan you, to move back, to talk to you badly, to treat you like a strange guy, a perverse or sometimes will make fun of you. But that does not mean that you don’t attract them when you do things correctly. You will undergo a great deal of social pressure, you probably will meet a lot of resistance, but the way you will react to it belongs only to you. However, if you sit down in a bar while waiting passively for signs of attraction before acting, you will wait for a while.

Getting closer, it’s testing her

Getting closer, it’s also judging her. If I get closer to her and if I feel nothing, neither the desire to take her hand, nor the desire to smell her hair nor the desire to kiss her neck … Then we do not have enough sexual complicity (and will probably never have it). This is why it is necessary to save time, to get closer and to quickly see if she is going to be a good deal or not. If it does not work with her, too bad, you should not get discouraged and go to the following one.

I don’t care if she resists verbally, you just have to get closer to her to know the truth. She may even not have realized the bestial connection which exists between you. You were not close to her enough yet so that she feels it, that’s it. Moreover, if yourself, you cannot feel it neither, it’s not good. Are you compatible? Is there a sexual connection between you? God is the only one who knows, but the answer is more often positive than negative. Getting closer to her is the real test of her level of interest. Every time you get a verbal resistance like « You are drinking a gay’s beer like a pussy »… Say nothing and get insidiously closer to her. When you will be closed enough, she will not resist anymore the sexual tension which exists between you. And not, that does not make of you someone special.