The beginning of the end, by Virginie 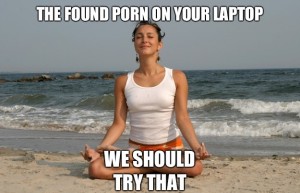 This Field Report was written by Virginie (my open relationship). She wrote it for her, spontaneously, then sent him to me because she found that a feminine vision of the pickup was missing on my blog. I also think that she used it to tell me more easily what she really thought.

The beginning of the end, written by Virginie

I hesitated for a long time to write in black and white what is going to follow. If I did it, what to write? How ? Sharing it or keeping it for myself? Finally, one night, I had a revelation. I knew how I was going to start and, like every time I write, the rest would come alone (watching Pulp Fiction at 2 am works pretty good for me).

Saturday, September 7th 2013. This afternoon would mark the beginning of a new me. Or, rather, the emergence of the real me. Except that I did not know it at the moment. To tell the truth, I suspected I would not really be the same after. Well, here I was, that’s it ! (wouah, this could be the introduction of the best of the worst B-movie! but I assume).

Last weekend before going back to college. I spent the afternoon at the swimming pool of a friend in Aix. Until there, nothing very grandiloquent. Except that then, at 5:45 pm, I moved on with my third date with a guy met on Adopteunmec. A boy called Fabrice Julien. We started talking at the beginning of the summer. Because I worked at night 3 or 4 days a week, I read his blog and his various e-books the other nights, just to stay awake and not lose my timing (yeah, not bad as an excuse, right?). Thus one might as well say that I knew very well who I was going to meet. Where from the mixture of stress and excitement a few minutes before the moment M. Moreover, I remember very well the confusion which reigned in my mind when he came and opened the door of his building. I hesitated between following him, telling him that it was not me (mistaken identity) or running away. Then I remembered that the biggest risk in life is not taking risk at all. Thus I took a deep breath and followed him. His confident and relaxed attitude helped to lower my stress but not to calm down my tyrannical Superego. Especially that the few people to whom I had spoken about this date had pressed me to have a change of mind. It is certainly why I persisted in wanting to go there. And, anyway, I had to take the bus at 7:15 pm thus I would only have to spend 1h and 30m with him. It is nothing, 90 minutes, in a life (in any case, it is what I repeated to myself when we were in the elevator). Once at home, he drank a tea and I took a hot chocolate (yeah really, a hot chocolate on September 7th, what’s the problem?!). Then, as agreed on Adopt, we settled down in his room to watch The Lion King (he had never seen it, I had to correct this horrifying lack of culture, especially because this movie is directly inspired by Hamlet, thus it is so classy!). In one of our discussions, he had suggested me watching the movie in underwear. Because I have nothing to be insecure about, I accepted. Then, to me, being in underclothes or in swimsuit it is the same thing so it didn’t bother me. It is thus half naked, in the dark, that he launched the Disney.

Conclusion: I will never see The Lion King in the same way. Before, I had never enjoyed the carnal pleasure(s). But that, it was before. And indeed I have to say that he was great: in spite of my passivity and my refusal to go up to the end (my little Jiminy Cricket was completely terrified, a first time that does not take place this way normally, then, as a total perfectionist, I was afraid of doing it bad, of being ridiculous or I do not know what else), he gave me all the same a lot of pleasure. I felt guilty that it went only in one direction but I was not able to do anything, still too much blockings. However, this first contact with Eros was a decisive moment in the work on me I started two months ago (namely: less thinking, more debauchery). I wanted to continue, I knew that I was on the good way to become happier and in accordance with myself. Well, OK, three dates were necessary so that I finally feel ready. But I absolutely do not regret. I became more confident, accepting with my rhythm the idea to lose control, not analyzing or intellectualizing everything and, in other words, to finally be myself. Fabrice was really patient and I guess that I would never thank him enough for that.

Since that day, we continue to see each other regularly. I would never have believed it possible : me and long relations, it is not compatible. But this one is different. And this is why it works. I just hope that it will not stop too fast, I still have some blockings which I would like to overcome. Then seeing him allows me to test a lot of receipts of cakes and to watch a lot of movies, it is rather practical.

In summary, I recommend Fabrice, he is a good report quality / price (especially that it is not me who pays the shopping for cakes). And, all the same, the word of the end (just for the pathos): thank you.

NB : it is her mother who pays for ingredients, not me.