Many men are afraid of women. But most of them do not even admit it to themselves because it is a taboo subject.

By putting my feet in the dish, I expect to receive a lot of insults in the comments “blahblahblah I am not afraid of women if I do not approach and if I practice only the missionary in bed it is just a question of respect…
– Shut up !”

Yeah, if you listen to the guys, they are all Don Juan who are not fags and who are very hot. But if you listen to the chicks, the average man in France, in our time, has lost his balls. The sexy guy a little macho, who is not afraid of anything, that chicks usually likes in TV shows or movies, is only a fantasy that is far from representing male sex.

Being afraid of women is a very common phenomenon. This is what I will make you aware of in this article (and you need to be aware of it because women are also increasingly afraid of men so we will not get out of it if no one does anything). Then I will give you some solutions to improve your love and sex life!

Before you begin, a little reminder: what are the symptoms of fear? Tangled throat, sweaty hands, tachycardia, stomach pain, ants in the limbs, paralysis, inability to concentrate, etc.

Are you able to approach an unknown girl ?

The fear of approaching women is the most obvious problem. And it makes sense because the approach is the first phase of a male-female interaction. If we do not go through this step, we cannot go further (except with dating sites).

Are you the kind of guy who hesitates, who procrastinates the day he will approach strangers, who invents apologies for doing nothing? If so, you are afraid of women. Are you the type of guys who approaches but who is silent in front of the girls or who is unable to say something interesting then who begins an investigation like Colombo “what is your name? How old are you ? Do you come here often ? What do you do in life ?” Again, if you have recognized yourself, then you are afraid of women.

Ah shit, I should have warned you that it was better to put your ego aside before reading this article.

Well. Where does this fucking fear come from ? The fear of approaching women is mostly related to the fear of the eyes of others…

It is the fear of being misunderstood if you approach a woman… it is the fear that a fucking feminist will throw on you to kill you while insulting you like a filthy beast “perverse stalker“! Yeah, I admit, thanks to Marion Seclin and her hateful friends, we live in a rather anxious climate that absolutely does not help men and women to be sexually fulfilled (this is a little the general psychosis and the guilt of everyone). Above all, we must not neglect the number of crazy hysterical women who circulate in the streets with the firm will to cut the balls to the first man who will speak to them.

The fear of approaching women is also the fear that the girl you are going to approach because she is sexy (she looks like Nabilla) and because she makes you hard is in fact a terrorist or the wife of a nervous guy who would unhesitatingly take out a knife from his pocket to stab you before even you speak. Yeah, I know, it’s politically incorrect to talk about insecurity in France and to say that there are people who are a bit crazy walking with impunity with weapons in the streets but that is the truth.

You may think that in case of an altercation, you could count on the solidarity of  other people and get you out of it alive? Well, all the lobotomized politically correct people will find it normal for you to get impaled because you are, according to them, the dirty stalker of a “poor defenseless women”. I may darken the picture a little, maybe the people around you would just not move, too happy that it is not they who are being murdered.

Are you able to sexualize with a girl you do not know well?

If the answer is “no” then you are afraid of women.

This may be related to a lack of experience, past bad experiences, an education that made you a too “nice” guy, to a physical complex (ears that stick out, big nose, small cock, premature ejaculator, not able to get hard, etc.)

How can you get out of it ? Fuck a lot of chicks, stop being afraid of being awesome in bed (at worst, it’s not so bad, we all started as a beginner one day), stop thinking that you need to be a romantic to sleep with a girl, stop being afraid of being thought of as a pervert, tell yourself that women love sex as much if not more than we do. In other words: stop sacralizing the woman. Also, stop putting the women on a pedestal! It looks like the whole present generation of men has been castrated…

Are you afraid to make yourself respected in your relationship?

Do you say “yes” to everything for fear of losing your girlfriend? Are you so afraid of upsetting her that you obey as soon as she demand something? Have you stopped to make yourself respected in privacy?

If so, you’ve lost your balls and you’re afraid of your wife… But do not worry, you’re not alone. Yeah, few men are able to stand up in front of their chick (with respect, of course, I do not speak here of beating her).

There are too many white knights and too many princesses in France! In short, how can you heal? I know it’s not easy (there’s no quick fix) but you’ll have to reframe your girlfriend or leave her and start on good bases with another (respect yourself, damn!)

So, I hope you are reassured about your situation. Accepting your fear is the first step to get out of it. You are not alone ! 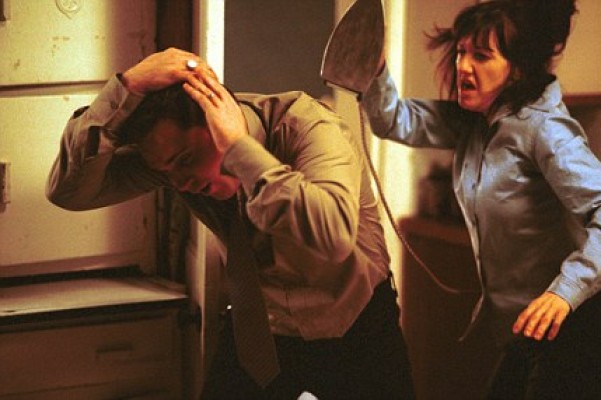 previousWhat gift to offer to your girlfriend or wife?
nextThe emotional dependence

What gift to offer to your girlfriend or wife?

Read More »What gift to offer to your girlfriend or wife?