The girl in body painting 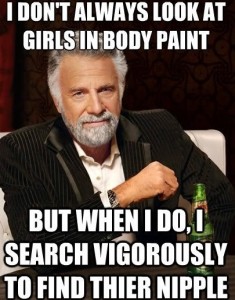 On Wednesday evening, because I had no fresh plan, I connected on Facebook, the hopeful heart. I commented on the new profile picture of a girl of my age I have in my friend list for something like 4 or 5 years. I had picked her up on Badoo ages ago and we spoke to each other once a year, by saying that “yeah, we should meet, I tell you when I am free”. For 3 or 4 months, I guess a renewed interest: she regularly comments on articles which I posts and agrees that doggy style is awesome.

On the photo in question, she was photoshoped : a strip of painting around the eyes then I wrote an innocent “yeah we should do a session of bodypainting”. This opening gave rise to a discussion by private message and a daring date, on Sunday, yesterday at 3 pm.

I went to buy some bodysuit-paint for the occasion: I thus waited a return on investment. For her part, she came with a cover and brushes. I had no idea what I was going to do to her until I see her, but I was not disappointed. Scrap of a woman, she is hardly more than 5ft25 but cute and sexy. Her long brown hair and a little curled like a wild girl which fell on her very suntanned skin reminded me a lioness. I thus decided that she would be my feline. When I announced it to her, this idea pleased her, I believe that she even mewed at this moment. That inspired me a lot : very sexy!!!

Once in my room, we a spoke little (around 30 minutes) and we agreed that it would be better to reflect stark naked. We play rock-paper-scissor to decide who will be the first to undress, it made me hard because I lost. She then removed her clothes one by one and I admit that I enjoyed my life. This is exactly why I game : A stomach so flat than I guessed her abs, firm tits perfect for my hands and a butt quite sexy.

I learnt a little more about her, she is from a family of people freed sexually. Her brother is a street stripper, she spends her summers in le cap d’Agde and goes regularly to libertine clubs : she is a very good investment. We discussed to know if in partner-swapping clubs it is seduction or not, “undoubtedly” according to her. Other interesting thing, she does not kiss easily “I certainly sucked more guys than I kissed. Some people tell me : fuck you have just given a blow job to me and you don’t want to kiss me?!”. Something else about which we spoke, she made an internet profile of cute guy and tried to pick up girls… Conclusion: she is in total agreement with my article on the subject: it is really very difficult to get out even if we are good looking, because most of the girls are shy, afraid and only here to boast. Of course, they will not admit it and some will not even do it consciously.

While I got down to make of her my work of art, I always touched her in a pseudo-innocent way to make rise the sexual tension. The result was really not bad, I made her black tasks, some red around the mouth like if she had just devoured a poor gazelle, and finally a big fluorescent yellow mark on the right buttock (the signature of the master), for fun.

For her part, she made of me a blue robot, my brain was connected with my sex by electric cords. When she painted around my sex, she said “I have never been so close to a sex without sucking it”. I said nothing, tried nothing, did nothing to break this sacred tension. Moreover, we should always get naked for an Internet date: the current passes so well then, it is something way more honest.

After the session of painting, she wanted to take photos (of me, her, us). She wants to put it on her blog then I had to hide my sex with a hat. I had fun making it hold thanks to my powerful phallus, but fuck at the end of 4 hours, my dick fell a little… so the hat fell too. She said, “I am going to help you a little” kneeled down and sucked me during 1 minute. It was so good after all this expectation! We put back in place the hat and made the famous photos then “I am sorry for just now”, she kneeled down again and finished the work. I have to admit that she knows her business, she swallowed me by saying “very good taste”. Flattering !

After that awesome moment, I lengthened and licked her up to the orgasm. She suckedme again, this time seated on a stool, then our respective paintings mixed in a carnal embrace (me on her, me under her and standing doggy style). She likes the balance of power, very good, me too.

When we went out of our bubble : 9:30 pm!!! It is incredible how the afternoon had passed fast. Really interesting temporal phenomenon of distortion. On the other hand, I didn’t work, and I felt guilty, I have to lock myself all this week to catch up and make a success of my final exam which will take place at the end of October.

In the evening, she suggested paying me a pizza if she could stay the night. What a deal. We had a walk in town to get some fresh air, we spoke a lot… she compared the street pick up with the street art because she sings with the guitar and improvise things. Then we returned, she has sucked me again and I have licked her again. This girl knows so well how to play and gives so much that I want to give to her a lot too in return. This morning in the awakening, we have done it in 3 or 4 positions. Balance sheet : she came 6 times and me 4. It is way better with girls who feel sexually at ease and know their body.

On the other hand, I am afraid of having shocked my new roommate. Oh, she needs to become used to it, eh. That one is not going to piss me off. It is necessary to say that I miss my ex-roommate a little but fuck he is in the nick for drug trafficking.

It was awesome, I really want to see her again ! May the God of the Game be with you !

PS : as I write this FR, she has just sent me a mp3 that she recorded for me without I asked her anything. What an artist! In brief what she says in this song it is that she was fucked well and that inspired her! Coming from a girl who has a lot of experience like her, I appreciate all the more the compliment!!!

PS 2: I wrote some times ago that the girl “lambda” could not appreciate the confidence as an attractive quality. In fact, what I meant to say is that she can be attracted for example, many girls are attracted by Chuck Bass. But because he is inaccessible… if they had him in front of them, many would chicken out : social pressure, stress, feeling uncomfortable with her body, has blockings, is intimidated, is afraid of not being good enough in bed, etc. And they would throw this frustration to his face! That’s the truth ! Of course, it does not necessarily mean that all the girls would like him, but among the girls who would like him, he could fuck not all of them. Taking the plunge would need notch, except that, few people have it. This is the concept of the “comfort zone”.