The impact of clothes on the women 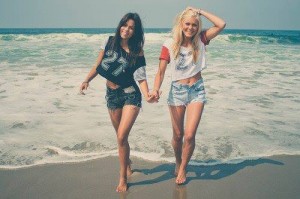 The impact of clothes on the women can be felt on several levels. Just like certain birds are sexually attracted by a color of feathers, the human beings are sexually attracted by certain clothes. There are moreover a lot of guys who are not even turned on by the women in themselves but rather by objects (for example: high heels or glasses), associations of ideas or by what these women represent for them. Well, the women are made the same way and can be turned on by a look or a specific garment (for example: a girl who would have one idol could fantasize over you because you too have a leather jacket or because you have the same haircut or the same tattoo).

Link with the evolutionary psychology

It is for what all the animals look at their partner’s. With the human beings, it works as follows…

Sexy :
– Being an Alpha ;
– Don’t care about the social pressure ;
– Having good taste ;
– Having access to resources ;
– Assuming the potential of attraction ;
– Paying attention on the way you get dressed ;
– Following a little bit the fashionable line ;
– Understanding the more subtle communications, like the women.

Don’t be a nice guy

Of course the women need certain characteristics the “nice guys” have. They remind it to us rather often. What they do not say, on the other hand, it is that they also have other desires, much less easily acceptable:
– The challenge;
– The excitement;
– Having some spare time;
– Being comfortable;
– Benefit from welfare benefits;
– Being able to speak about you to her friends and make them jealous;
– Having the feeling that you are special;
– Feeling in you the potential for a serious story one day ;
– Feeling in you the potential for a discreet and naughty relation;
– Having to do what you want because you are a leader;
– Being protected;
– Feeling many strong, positive and negative feelings;
– You are intriguing and mysterious.

What is good with the Nice guys:
– Being courteous and open the doors;
– Knowing how to listen but not becoming her personal therapist;
– Showing a vulnerable, human side.

What is not good but with what they are too often associated:
– Being submitted;
– Being easily dominated by the others;
– Making too many favors, always wanting to please the others;
– Being needy ;
– Waiting that the others guess what you want, not doing enough things for yourself.

– No “not gay” guy would want to let think that he is gay. Yet, being fashionably interested can easily be confusing. You do not thus have to appear “gay” but you do not have to let the fear of seeming gay preventing you from being the best yourself.

– “I just want to be myself” is the excuse used by people who are scared to have to do better. It is an easy exit because we always tell to people that it is good “to be yourself”. But what is necessary to understand, it is that they do not get dressed in a way which looks like them but rather in the way people who are scared to assume what they are get dressed, as a kind of protection. Nobody believes it : “if I get dressed in a way which does not please the others I say fuck you because it is what I am in fact”. It communicates a profound sense of unease.

It is fears and stigmatization that are commonplace in our society. That prevents people from really expressing their identity through their look. These fears find their roots profoundly :
– At school, people laughed at those who stood out.
– At home, if you grew up with bad not sexy models who let you think that it is what you are too.
– …

The women are demanding:

The women are not quite stupid nor superficial, they are elitist. And their requests are justifiable, in a way, if they do the efforts to be up to their expectations. They do not want “average” guys, they want the best guys they can have. They will thus reject you if your look does not communicate that you are the best they can have. Most of people badly react to the “elitist” word simply because most of people are not part of the elite (thus it reminds them that they are not a member of it: bad reactions).

Now, being well-dressed communicates “I have a high social status, and I have access to the resources.” The women are programmed to choose a man like that to reproduce. One good reason : it assures their kids will be free from want.

Well, you should not believe everything you read in the fashion magazines : a lot of bullshit and ugly things. It is necessary to think by yourself of course and also take time to educate your taste.

The various types of men :

The women are not only programmed to react to money, they also react in front of male sexy stereotypes. And if they put you in the “sexy” category rather that “average”, that changes all the interaction.

The look of the “well-dressed” guy is the most classic. It is commonplace but it’s OK. That will not make you miss a lot women but that will not particularly help you to excite them. If they like your face, your muscles or your personality, they will certainly let with you fuck them after several dates.

The problem is that the women put you very quickly in categories when you approach them. You thus have to show your talent quickly. If she puts you immediately in the “sexy” category that will go faster and it will be easier for you than if you are tidied up in “Nice guy” or “normal guy”. The sexy guys are, for example :
– The rockers ;
– The rappers ;
– The artists, the intellectuals ;
– The Hipsters ;
– The Tradders in a suit ;
– The lovers ;
– The metrosexuals ;
– The surfers ;
– The motorcyclists ;
– The maffiosos ;
– …

By comparison, this is what does not turn on the women:
– The yucky hippies who stink ;
– The Nice Guys ;
– The little mama’s boys ;
– Those who try to boast but who are ridiculous in fact ;
– The not sexy Geeks ;
– …

Why most of people don’t have a sexy look:
– You need to do an effort to go out of your zone of comfort;
– Maybe your friends and family would like that you remain very wise (IE “not dangerous”) like before…

Exercise: next time when you will see a guy, with a lot of girls who try to pick him up, look at how he is dressed and to which stereotype he belongs.

How does it work ?

All the girls are not attracted by all the stereotypes. But all the girls are attracted by at least ONE type of guy in a very powerful way. They then are so much excited that they lose their inhibitions and forget this fucking social pressure. It is about these looks that I’m talking : those which provoke hysteric and fanatical reactions on behalf of certain girls.

To don’t be thought of as whores, the women create rules they follow with the guys. For example, waiting for 3 dates before sleeping with a guy to don’t be thought of as an easy girl. But with the “sexy” guys, they forget these rules. Because with sexy guys, the society (in their mind) does not question the fact that they are “good” girls (even if they suck on their knees). The fear of the judgment disappears. They sleep with them because they are too much excited and because it is more socially acceptable to sleep with a sexy guy than with a “normal” guy or “nice guy” when they are not in a serious relationship.

Some will even say that they were lucky that these guys fucked them. You maybe already heard certain women telling their lives “the guitarist of the other night called me back” or “you will never believe what the sexy French did to me the other night!” The fact that these guys belong to “sexy” categories legitimize the fact that they have fun and prevents their friends, in a way, from judging them.

It’s your turn to be sexy

Choose a sexy profile which corresponds to you, which you are interested in. For example, a boss of a SME (SMALL AND MEDIUM-SIZED ENTERPRISE) is not going to get dressed as a rapper, that would be strange.

Find a model which corresponds to this stereotype and use it to understand how it works.

As long as you are not an expert, it is better to follow models. It is a question of copying the others, nor becoming a pale imitation, but it is a question of taking shortcuts towards success. According to me, things do not have to be more difficult than they already are then why always wanting to reinvent the wheel ? You will then personalize your look according to your progress.

Try to always get dressed well, because that helps to feel good. The chromotherapy is really something very interesting.

If you have not the results you hoped:
– Did you choose a sexy and easily recognizable category?
– Did you choose a good model…? or a mediocre one?
– Does this sexy category correspond to your personality?
– Did you mix too many stereotypes which do not work together?
– Did you go too far (in an environment where it would be a bad idea) ?
– Are you simply in your period of adaptation for your new look?