The problem of the link purity/affection 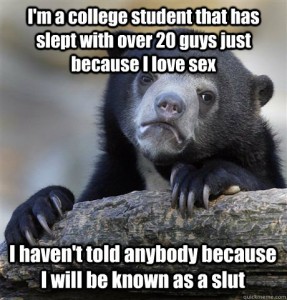 Casual sex is often quality sex but women (even quality women) will catch you, eventually, with their affection. The affection is the most powerful drug of the world, even more addicting than the sex.

As « Mister Hedonistic » you make her understand that you do not want to see only ONE girl. That being faithful in love, it’s not for you. At the beginning : « of course no problem ». But the time works in her favor and you become attached more and more to her. Having said that, you can slow down this process by deciding to do not see her more than once or twice a week.

Doesn’t matter the time you spend together, most of the women will finally try to urge you to make a commitment subtly by opting for the purity.

For example : « this guy at the bar stole my scarf and said that if I want to get it back I have to  have a drink with him » or « if you do not want to be in a relationship with me, you know, I can have other men when I want ». And there, you dream up. Women know that the purity is our Achilles’ heel. And they know that in order to be able to accept the feminine affection… most of the men, weak or conditioned by the society, need this feeling of purity.

The guys are afraid of losing her purity (that she sleeps with someone else) because then, they could not appreciate anymore her affection. The origin of the affection is thus essential for them, more than the girl herself because they would leave her if she cheated on them …

All this comes from the fact that these guys agree to go out that with ONLY ONE woman. Or, they are too much involved with a girl who does not really suit to them. Watch out  : there is nothing bad to see frequently one single girl, the problem it is when you do it for bad reasons.

In other words : It is an issue if you make a commitment by fear that she sleeps with another one rather than because you really want to be with her.

Going out with several women

Us, the men who wish to be spread and to test several women before committing with the best, are inevitably going to strike us in the problem of the link purity/affection : « Oh my God, she is going to sleep with other guys on her side. »

It is not easy to swallow because that requires to overcome our own genetic programming. But you have to learn to accept the affection of a woman without worrying about her level of loyalty to you : do not let the sexual choices of a woman affect your capacity to appreciate her feminine energy and her spirit, etc. You will become a stronger, less manipulable man.

We have only two needs in our love life : the sex and the affection. You can deny it as much as you want but it’s true, this simplicity is disconcerting. Understand that the guys who make a commitment with one single woman have a lot of affection coming from a stable and pure source. And it’s great ! But they pay a high price for it…

The nights of solitude

For us, men who want to be spread and to make love a lot, the feminine affection will enter and will go out of our lives.

Sometimes, it will hurt. There will be periods you will fuck a lot, without affection. There will also be nights of solitude. But it’s furthermore a reason to build a lifestyle which does not concern the women.

If you want some feminine affection in your life but if you continue to flirt with several women, you will always pay it through the problem of the link purity/affection.

previousMen fantasize over the purity
nextThe attraction is universal