This secret makes a good lover 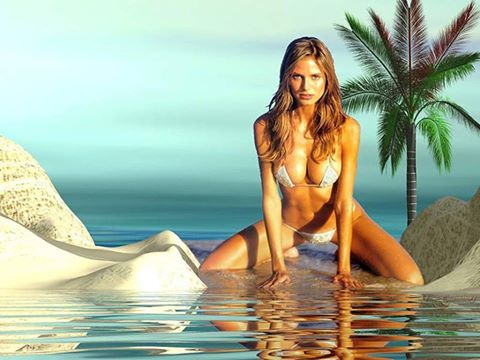 What is, according to you, the thing that can easily differentiate yourself from 90% of men in bed?

Quite simply, it is: the fact that you give a lot of importance to female pleasure.

And when I say “pleasure”, I’m not saying that your cock stirring for 5 minutes in her pussy is enough to give her the ultimate pleasure. This is what most guys think but that is wrong and selfish.

Many guys think they are good lovers when in fact they only think about their own enjoyment. This behavior contributes to the fact that women are suspicious, test us and do not fuck easy. If they were sure to take off like crazy, they would not think so much and would not beat about the bush so long before. If you give me a Kalashnikov so that I delate all the sex-starved and all the boastful bad lovers, the gender relations would change tremendously!

In practice, tell the girl you are interested in her pleasure, in her satisfaction, the fact to make her come. She will find that you act differently from other guys. And that gives you a huge value… that will tempt her to sleep with you despite social pressure. And if, after you can be a little discreet about the sexual intercourse, it is even perfect!!!

Women are too often (and therefore afraid to be) used as instruments for the pleasure of men. But I would say we could very well say that we also are used as instruments for her pleasure. Finally, the best would still be that nobody is a tool for anyone and we can enjoy together in peace of mind and without experiencing buyer’s remorse.

But to get to this stage, there is quite a way to go in your head. Often people have a rather misleading picture of gender relations. If you have not read it yet, I recommend you The (inconvenient) truth about gender relations. Anyway, think about the fact that you can offer her the ONLY thing the other guys can’t offer : easy, fast, intense, passionate, without judgment sex… When you see things like that, it gives you even more confidence. It is a basic principle of fast seduction and it is a reality!

You have to make her understand (by communicating it directly or indirectly) that, with you, she will strongly orgasm. It might sound a bit pretentious because most guys rarely make come chicks they just fuck one night (but believe they are good). It is also that, your strength! Be deliciously against the current (but be good after you would be ridiculous otherwise).

In The awesome lover’s manual, I explain two techniques that will allow you to make almost every girls enjoy. Those who do not orgasm despite that are girls blocking on a psychological level. To give you an order of magnitude, about 40 girls I fucked since I moved to Lyon, only 2 have not orgasmed. This is 5%. And yet, they were not far !!! They just have blocked so much pleasure that after a while it started to hurt them. So I stopped. But they told me they have never been so sexually high in their lives.

Do not be afraid to lick, but often the guys lick anyhow because:
– Either they do not know how but do not want to question and learn ;
– Either that bores them in fact and women can feel it.
In fact you have to lick in a certain way and insist so that they get free and enjoy. Some are struggling to enjoy and the first few times, it will be long so they unlock but then they tame that feeling and enjoy more quickly the following times. Letting go, it’s not easy. Then, show her that you are on her side, that you understand how she feels, that you like her body, etc.

To help them exult, you must already find their G-spot with our fingers. The combo “clitoris + G-spot” is what will allow you to make orgasm almost every woman. To stimulate both areas at the same time, there are a lot of different techniques (with your fingers, your tongue or your sex). Well, some girls prefer a particular area or stimulation, so then you have to case-by-case adapt. But keep in mind that many women do not know what they really like either. So try to make her lose her mind (of course, stop if she doesn’t want not something). But do your best and offer her your expertise! Whether you are small, ugly, or whatever : being a good leg and knowing at the fingertips women’s bodies will give you great value to them. Looking relax and confident in such a situation too.

I have a friend who picks up down the street and brings chicks in a disused lift he found in the city center. He can not fuck them there, even those that are super excited and who kiss him. So I asked him how he proceeds to try to move to the sexual stage and he said he takes their hand and places it on his penis through the pants.

I agree that in the case of a shy girl, it will often help so that she dares to touch you. However, I think that before doing that, she must be warm. Because if you do it point blank : you may look like a big pervert and it may block her. Especially when she is an unknown like in the case of my friend. We really need that her excitement is greater than her degree of social pressure, so she doesn’t think too much about tomorrow. Rub her a little the crotch, over her clothes so she wets, then gently on her panties and finally in it. When she is soaked and her legs begin to tremble and her stomach to have spasms, emotions take precedence over reason and she’ll want you even more than you want her. Success rate = 90%.

Because yes, it can be a fantasy for them. And it’s a win-win scenario if done right. Put yourself in their shoes: they get home from work after a boring day and are approached in the street by an alpha who knows his stuff. Then, they have a lot orgasms in an unusual place before going back home. Is it not as tempting scenario? And too bad for those who will say no.

As I said, we must however get to make her understand that we think a lot about her pleasure in it, so that she accepts the deal. It’s even our priority. So take care of her before asking her to take care of you. Having this opportunity will help her to do not feel “used”. So it does not spoil her fun. A woman should never be considered as a “machine that empties your balls.” If this is your case, your mindset must change. Success will then logically come. They probably feel it…

In life, most women have a character rather “submitted” in bed. They like to be dominated (even if sometimes they like to dominate while jumping on your cock during 5 minutes). That’s why a PUA learns to communicate alpha characteristics.

However, some women are “dominant” in bed and thus prefer more lambda guys. The thing is that, statistically speaking, there are many more women in the first category. As a consequence, I advise you this alpha approach… and take matter into your own hands (in an elevator or elsewhere) to maximize your success rate.

For the rest… Alea jacta est

previousBeing beautiful, to what does it serve?
nextThe (scandalous) syndrome of the bitch