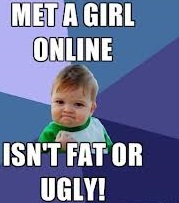 It all started on Adopteunmec, a few weeks ago (In August). Adopte is the only French dating site with a young audience. However, like any other dating site, the ratio is 10 AFC / 1 girl (despite the fact that the registration is FREE for women). The chicks have their ego boosted : they choose who can talk to them and who can’t, but, when we write to women who allowed us, they answer in condescending ways (princess mode on). I think that even for a girl who tries to pick up boys on the Internet, a man who tries to date on a site is immediately labelled as “loser”, so he deserves (in her opinion) to get hurt badly. The only way to counter that is to show that you don’t take online dating seriously. That you don’t need it.

So, I decided to take advantage of the summer offering (3 days free for men with beards). Due to a lack of time, I quickly created a profile (scandalous man looks for a girl who comes to his height, not interested in minors, moustaches and women with a penis) with only two pictures. Relatively quickly, a 19 year old (hot, cute and looked emancipated) allowed me to speak with her. I like this role of sexual-object, so I leaded the conversation to gender relations (and when I say « relations » it’s of course « sexual relations »).

At that time, I thought « what a windfall, such as Christopher Columbus, I just discovered a new land to vandalize (full of sexy indigenous) » ! Unfortunately, the three days had passed when she answered : I could not write to her without paying… a true scam if you want my opinion. But I decided to do not give up : so I created a woman profile in order to add her « as a friend » and of course to explain to her why I had to start spouting such nonsense.

It was smart to do so, and I don’t say it to congratulate myself. But, by creating a woman profile, I immediately accessed to all the functionalities of the site (unlimited free messages + unlimited free contact + a blog which gives advices to women about how to get a man). Isn’t it sexist ? What an injustice! So here I was… I used to hang out on the site during two weeks with my female avatar, contacting naughty girls here and there. I paid and I swam though the mesh of the nets of the moderators : I did upload again two photos of me but in my description I wrote « I AM A TRANSVESTITE ». In the end, one day, I was reported by a “Judas” and banned from this virtual Paradise.

To come back to the 19 year old chick (In France, the age of majority is 18 years) : she gave me her phone number after about ten emails, then the conversion became more and more naughtier… she gave me openings, so, I “tactfully” asked her naked pictures of her. I think she really expected that, because she shared without too much difficulties (the cutie immediately became a fantasy). She had guts, an adventurer who knows what she wants and goes for it… so sexy ! I could have married her only for that (and because she is really hot too although short). It became really erotic. I wanted her, and while we both turned on each other with our pens, sexual tension grew and grew : she even confessed she was masturbating. After having shared such a moment, although virtual, I think two people then have a 100% chance to sleep together if they meet… But the thing is, after that hot night, we didn’t meet because she went off on holidays. As a result, I deleted her pictures because I thought she chicken out (except one, I admit it, she excited me too much in this position). Moreover, a Pick Up Artist follows a code of honour, so don’t betray the trust of women. On second thought, if we cannot recognize her on the picture (if we do not see her face), and if IN ADDITION she is in underwear (it is not like if she was naked, rather if she was in swimsuit), I do not see who it can bother except those who are always a pain in the ass for the principle…

There has been 3 weeks of radio silence and, when she came back, I found a nice surprise in my mail box : she invited me, a sunny afternoon. I drunk her and we saw a drink (or the reverse). She is very sexy, I like her hair and she is fun. On the same evening, she called me back in order to tell me that she was in town, at the birthday of a friend, she was really bored and wanted ME to keep her company… I was in town too, doing nothing. From this point, it all went very fast : near midnight, she was already holding my hand… we kissed few minutes after. A first kiss on the cours Mirabeau, so romantic. We talked a little more, she told me how she did blowjobs to her last boyfriend so I encouraged her to continue this conversation in a bar (to motivate her I bought 2 beers). She still said something that disturbed me : she felt a sudden urge to be in a relationship. Probably in order to see my reaction : like usual, I didn’t seem affected.

She then offered two beers, a little bit reluctantly “I am pretty sure that if I say I will have sex with you Fabrice, you would buy me everything I want” I held on. This alcohol helped to get in the mood, and I logically propose her to come over in order to see my fishes. The thing is, the only fishes I have are drew on my duvet (hahahaha). She didn’t understand my joke but, at the bar, asked me if she could have a pie at my place. OK. When we arrived home, she did what she had to do while I waited for her on the balcony. When she joined me, I suddenly ordered her to « get out of here » while at the same time I started pulling her behind me in order to kiss her (I made a contrast for fun). I lifted her up off the floor turned her on against the wall… she clung on my hair more and more. The sexual tension raised, it was savage. She sharply threaten me « you, buddy, will see what you will see », she took my hand and throw me on the bed… I have to say, I was lucky to find her…

In the bedroom, I have to say that she turned me crazy doing deep gorges with her hot body and her nice tits and ass (such a good moment !). Me, I was not really good. I don’t know why, I was not in a good day. I was not satisfied by my performance and I didn’t become hard again “to save the honor”. It is rare that it happens, but well, I have already been in that situation before… bad luck. That also calls me to order : I still have to work so that doesn’t happen to me anymore.

I walked her home, holding her hand, it was really cute. She texted me yet, she apparently wants to see me again in spite of the fact that I was not as good in bed as what I would have wanted to be with her… certainly to give me a second chance. Needs that I see her again before she has a change of mind, my “honor” is at stake! No, I’m kidding, I don’t give a shit I am sure that she is an intelligent girl who understand that it can happen (even to the best).

May the God of Game be with you.