The wingman in seduction 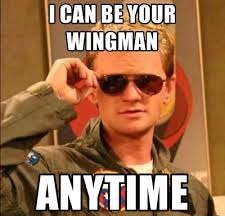 A good thing to improve your game is to meet other good seducers in your city. Stay humble and cool even if you are better than them because the exchange is (almost) always rewarding.

For my part, I avoid taking as wingmen people who always give lessons, mythomaniacs, half-virgin guys who think they know everything about everything because they watched the formations of Nicolas and Vincent, etc. You see the kind of guys (I can tell you that there are many weirdos in the community of seduction but fortunately there are also great guys)!

Finally, I do not like going out with 45000 guys, you do not usually pick up effectively in a pack. At the limit with one or two motivated buddies, it’s OK, but it is a maximum.

What is a wingman ?

A wingman is a pick up companion who is part of the seduction community (so it’s a player). It is, in the broad sense, a buddy who accompanies you in your sessions and your delusions, and that helps you to move forward in your encounters by the energy and the good mood that he gives you (and also thanks to his little pushes like pushing you on a group when you do not decide to approach). It is a guy who helps you to achieve your goals, if necessary, including by taking care of the friends of your target.

Seducing with a wingman, it is often easier than alone because he helps you spending better time (you can make fun of mean girls together) and you are less likely to be assaulted. I’ve said it before but I repeat it because it seems important to me: If you want to seduce women with the help of a wingman, I suggest you choosing someone who helps you and allows you to appear under your best light… especially not someone who always tries to dominate you and show that he has a bigger one than you.

What is a wingman used for?

The social network is important during a phase of seduction. Your buddies will have a positive or negative impact on your pick-up according to their behavior. So, choose respectful people because the more they respect you and the more they will strengthen your social proof in the places you go. So your social proof will walk with you. When you go out with one or more wings, it is therefore important to focus your attention on developing a good internal dynamic before even focusing on the sarge itself.

In addition, with wings that suit you, you can set up routines or at least a “habit” that works. Good routines with an accomplice allow you to bounce on subjects of conversation, to bring positive energy, etc.

Finally, you will encourage each other during the pick up sessions and never pull you down.

There are precise wings rules so as not to sabotage the work of the other. The most important thing to remember before, during and after interactions with other sets is this: your wing is always more important than other people. Giving more importance to a girl you know for a few minutes than to your wing (who is supposed to be a very good friend) is a serious fault, and is a sign of a lack of attention/affection, of poor social life. Your wing is “sacred.” He is more important than the rest. You must not leave him alone, making fun of him to try to shine nor ignoring him.

Rule # 1: The pilot approaches the group and invites the wingman into the conversation.

Target flight is theoretically unimaginable between two good wingmen. If both like a girl, she is for the first one who approached her because the wingmen know that playing as a team is more profitable than playing selfishly in the Game.

Rule # 2: The pilot chooses his target and there is no competition. Only if it’s lost for him, the co-pilot can attack this target.

If your target prefers your buddy, you have to help him by saying a lot of good about him and diverting the attention of anyone who could interfere (especially the jealous “good friends”). To console you, tell yourself that you will be sent back the lift a next time… pride and ego have no place in a healthy game!

Rule # 3: You make each other increase your value by saying positive things about the other. You try to neutralize the cockblock threat.

It’s always better to approach alone a girl who is alone but if she’s in a set, it’s fine if you go with your wingman.