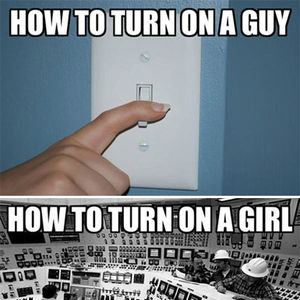 When I see the amazing number of women who read articles of seduction (which are a common occurrence in women’s magazines) and that, in the most patent possible way : I have the impression that it is a shameful subject … ONLY for men. Nevertheless, you would be surprised by certain reactions, because even if I do not mention it out loud, I don’t hide to my friends or my family that I am a member of the international community of seduction. Apart from stupid reactions (strangely from people who are bad with women and from frustrated girls who laughed silly to try to put me in my place), most of people are interested in the demystification of love (reflection already started by Denis de Rougemont in Love in the Western World).

Describing the magic moment when a guy and a girl meet, learning how to manage a relation, knowing what to do if we have a crash on someone already in a relationship, or, how we can seduce this person who seems inaccessible to us, and thus how to become happy and spread… These are subjects about which everybody wants to speak. For example : a friend devoured tens of articles on my blog after I just showed her one, another one after having seen a link on my Facebook wall was pleasantly surprised by the relevance of the approached subjects and the quality with which they were addressed. I discussed several times about gender relations with random strangers … Morality : the seduction has never been as useful for me as since I talk about it. The girls are fascinated by this kind of subjects, it is well known, and the guys who have the maturity to admit it, are often also. Because yeah, rare are the ones who really naturally know everything.

For the idiots who would like to make fun of you because you read articles of personal development, pff… It also happened to me, but there are worse roadblocks ; and honestly this is not too difficult to push them away from the way which separates us from a girl. It is not Barbara Gould men like us who will let such childishness annoy us ! Remember that those who criticize are in fact often jealous persons uncomfortable in their own skin who echo their hatred on people who want to succeed because they did not have themselves the courage to try. They think things are what they are and nothing can change a loser.

Isn’t seduction an universal subject? And especially, isn’t sexuality THE source of so many psychic troubles because most of people were not informed enough in their youth ? It is not a subject of mockery : you are reading a manual of seduction, and…? If understanding the other sex was taught at school, people would probably be happier during all their life. Indeed, like every knowledge, some acquired it during the childhood or in the adolescence, the last during the adulthood whereas the others will never have it, it’s so sad for them !

There is an intelligent and pleasant way to pick up women, it would be a shame not to make use of this opportunity ! I’m talking about a playful seduction, based on the human, which makes people enjoy interactions with the opposite sex. It is the seduction that I like, the pickup of pleasure. No headache, no A3-S2 or something as in the Mystery Method. In brief, I will always be for the school of the simplicity, because it is in my opinion the only way to really enjoy the seduction as a game. In contrast, the current tendency is excessively simplistic but whatever! What it is really necessary to avoid, it’s becoming the bumpkin of 30 years old who wears Harry Potter t-shirts, who lives in the attic of his old dad but goes out 5 evenings a week thanks to his ACTIVE SOLIDARITY REVENUE to pick up chicks. Past forty or fifty, this guy would have no results anymore because his lifestyle is shit, and I am more or less sure that he would not have a real choice in his conquests because his lifestyle would not offer him a good enough panel of girls. If we denigrate too much the personal development to only dedicate to the pickup, we risk to become this guy. It was an extreme vision of a guy without any will of personal development, now here is the other extreme… Being an ace of the personal development and spend his life to read a lot of books or to think about very specialized subjects, and so never going out to meet women and get laid (because well, it is a little bit the purpose of the pickup) it’s not safe either. So, let’s going out, let’s activate our Mojo, let’s deactivate our neurons, let’s wear our most beautiful socks and let’s verify that we still have the lucky charm condom which is in our wallet since the « middle school years ».

To finish before getting to the heart of the subject, you have to know that it is recommended to sleep with at least two or three women before trying to go into a long term relationship. It is not necessarily to immortalize the model of the Dom Juan collector… it is especially because a lot of guys are in couple by default with the first girl who agrees to be with them. I saw it several times : the guy who arrives to almost nothing, and who at the first success, refuses to leave the girl and begins something that he undergoes more than he lives because the girl does not really correspond to him. Having several princesses to his credit allows to know what we look/do not look for in a girl, which character traits please us or feel reluctant at us, which personality would complete ours… In brief, you will have to choose with full knowledge of the facts and, fortunately, this ebook is going to help you there.

To conclude, trying to improve is an objective which I consider noble. According to me, the human being should be in perpetual research of evolution, at least until he reaches a stage of self-fulfillment which suits him. Indeed, how many men live unfortunate because they did not dare to change ? It is normal to wish to evolve if we consider that something goes wrong, or if we think that something could be better. Although you should not fall into the trap of « always more until the infinity » : recognizing and accepting our weaknesses with the aim of filling them is a brave venture which, with common sense and motivation, inevitably leads to happiness. Then to face some criticisms which were finally only concealed attacks, I will say that we are not geeks disconnected from the reality. The members of the community of the seduction are normal guys, ordinary women, except that they dared. You too, make the move, unless you already did it.

Let’s work (those who refuse to study or to question themselves on certain points will not have the right to complain if they do not satisfy their sexual appetite) !

previousWhat do we do after the orgasm ?
nextYou have to understand that women are like men