Translation : Ross Jeffries, How to get the women you desire into bed… 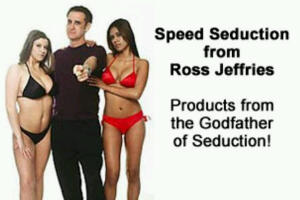 …A Down And Dirty GuideTo Dating And Seduction For The Man Who’s Fed Up With Being Mr. Nice Guy.

Ross Jeffries is an American author, writer and television personality featured on such programs as The Dr. Phil Show, The Montel Williams Show, The Jane Whitney Show and The Daily Show, and a self-described speed seduction expert.

Tom Cruise’s character in the film Magnolia was said to be inspired by Jeffries according to the film’s writer-director Paul Thomas Anderson.

His famous first ebook had not been translated into French yet. It is done now.

You can read it in French here.

You can watch him practising speed-seduction here (if one day the video doesn’t work please send me and email so I fix it) :

previousDo Not Read Me : The dictionary VS the riffraff and the kikoolol
nextIf you want to know if you are fuckable, try to flirt with a gay…

Translation and comment of the text « Baby Woman » by Emily Ratajkowski

The text : The original essay : here My translation : here   Comment: “I was modeling only occasionally at that time, but I found the…

Translation of the Game Acceleration

Game Acceleration 2.0 is the first e-book that opened my eyes about the science of seduction in the broad sense. Indeed, because it is a…

I am a fan of Cajun PUA since I saw him in Keys to the VIP on YouTube, something like two years ago. I think…