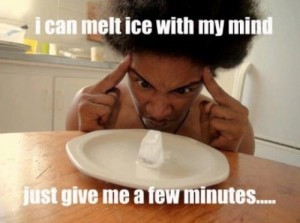 Continuation of the story with the girl of the ice cubes.

She turned me on by text messages all day yesterday then asked me to choose how she will dress for me tonight : red dress or blue electric dress ? The average guys would have said red (color of the desire) then I chose blue to be a pain in the ass. She made an appointment with me in a club at 2 am.

OK, I know that you should not organize the nights according to a girl but well… like an idiot, I contacted Arnaud, Hafid and Padawan and we went to the club in question… That has cost us 20€ but because we rarely go there, that changed us. Except that I did not see her. I texted her, called her… no answer. 2am, no one. 3am, still no one. “It is probably a swindle otherwise she would have called to apologize”. With Padawan and Hafid, we searched everywhere in the club and we went as far as getting incognito into the VIP area. Not there.

Well, I didn’t want to approach a lot of girls in case she would arrive (for not losing an easy shot) so I have rather been the perfect wingman. With that said, it was a good night : I pissed off a guy who looked shy, I laughed like rarely, and there was even a girl whom I would have been able to kiss easy peasy I am sure because I approached her then I went back speaking with my buddies and she ceaselessly came back talking to me. I told her to kiss her friend (a cute girl), she answered “ok if you kiss your buddy before”… we cheated with the technique of the thumb between the lips but THEY they kissed for good. Cool, we won. Padawan has even taken the number of a girl ! We have just made a big step forward !

I then met the nice buddy of the girl of the ice cubes, the guy a little bit fat with the head of teddy bear, who had offered drinks to us the day before (Cf the previous narrative). It turns out that he works in this club. OK, so, with such a social status :
– she used me to try to make him jealous and to bang him ;
– or then they had read my blog and wanted to make fun of me because they take me for a poor virgin who tries to compensate by writing about seduction.

He nevertheless told me that she was there, in a blue dress, that he had seen her and that she would never have left without saying goodbye to him. I read “I know that you’re lying” and “Psychology of the liar” but I had really too much drunk then it was hard to analyze. Pissing around and plot or big misunderstanding? I tilted for the first option but hope makes you live as said my mom.

This morning, I noticed with dismay that the girl had deleted me of her FB. Who knows what happened in her little cute disturbed mind… She published on her wall “I heard you are a player. nice to meet you, Im the coach” with a picture (bottle of champagne & ice cubes) : it is probably for my attention. What did she try to prove? Wasn’t it a little bit useless ?

Do you think that her challenge was to see if she would be able to make me run up in the club ? But, once again, I don’t see the interest to do that… I go there from time to time and I had planned to go out anyway thus that did not bother me… then, especially, it is very normal for a sexual guy wanting to screw a fuckable girl who turns him on like that. If I had not tried, it would have meant “I am gay”. Conclusion : there are really a lot of people who have nothing to do in their lives ! Finally here we are, she is probably not a panther at my height, rather a little pussy.

Well, motherfucka, I will not take the abject step of contacting again a young tease who maybe did just flinch and cave in completely. I will treat it with hatred. I deleted her number in order to do not be tempted to contact her during an evening of weakness. Especially that we shall re-meet certainly in parties.

So, I spent a nice night all the same but I would have preferred doing her things without delicacy in doggy style position at around 5 am o’clock. We would have had orgasms both of us, win-win scenario. Well, like I often say, it’s her loss more than mine and then it will all the same make a good story to tell on my blog.

The morality is: when a chick comes from nowhere and tries to pick you up while you have no social status, nor the face of Johnny Depp, nor the body of Brad Pitt nor the size of Josh Hartnett nor the money of Clooney… There is most of the time a trap. Be careful. But nevertheless I do not want of all this: the true PUA fucks girls with only his cock and his knife.