Virginie – Round #3 (the hymen VS Cyprineman) 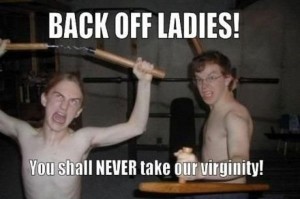 On Monday, Tuesday, Wednesday, Thursday : It is in my boxer shorts in Mickey’s effigy and with a vile beard of 15 days that I revise my exams of accounting. I am strangely very put under stress and obsessed by the accounts of debit and credit. The lack of sex also begins to be CRUELLY felt, because stuck at my parents, I did not screw since the girl of the bodypainting. I even dream about it at night, then I sleep badly and I am unbearable. I pity my circle of acquaintances.

On Friday: yesterday thus, I sent a message to Virginie. I told her that I wanted her. Answer ” I have just gone to the osteopath and he told me no effort during 48 hours thus it is not possible”. My heart skipped a beat. By way of outlet, I sent to all the girls that I fucked and whose number I kept “do you have you a friend who needs to be filled?”

They have all, without exception, taken advantage of this shout of the heart to rub salt in the wound and patronize me. It is crazy, ho, as soon as you show a little of weakness, they try to stuff you instead of helping you. So I caught up the thing with a sincere text but which restores the order in the Universe “I want to fuck an unknown, to make her live the moment of her life, but I have no time to go out to pick up because I study for my exams”.

The good side of the business it is that I so established again the contact with Marie (my open relation of February) and she is OK tp go back to bed with me from time to time. So cool. That tempted me to shake me then I watched Tony Parker crushing the team of Spain. The second good news, I also managed to convince Virginie to come all the same (because the missionary is not considered as a physical effort by Dr Cyprine and she rather looked all right). An feverish “all right” thus, certainly because she was put under stress.

On Saturday morning: I received “euh I learnt a not excellent news this morning and I have complicated things in this connection with my mother. So I am not very motivated for this afternoon =/
– Okay ! I don’t want to oblige you to tell me about it if you don’t want to! Just tell me if you cancel or not
– So much the better because I have no desire to speak to you about it. Euh well I dunno, I don’t want to kill the mood.
– Kill the mood ? What do you mean ?
– Well, we can’t say that I am in a very good mood.
– OKAY, I see. Well that’s up to you to tell me if you think that it is better to change to you the ideas or to stay at your home…
– Hem, seen like that… I am going to try to motivate myself but I promise you nothing.
– I thus have not the impression that you really want it…
– It’s complicated =/
– I know it’s complicated. The problem with your mother on one side. Well yesterday you wanted to cancel because of the osteopath. I suppose that you have 1000 questions in your mind but isn’t it simpler to come and see by yourself ? Acting has never created real regrets, not acting yes, on the other hand. I need to know to get organized in the afternoon… :)
– It is more the Not Excellent News which put me in a bad mood than my mother. OK. I am going to write and I think that I will feel better later. Long live to the introspection!
– Okay tell me then
– No no, I planned to keep you waiting, that seems obvious =P
– Lol =p Well I am going to organize like if you were coming then because I think that it is the most intelligent thing to do in this situation:)
– One thing’s for sure, you master rather well the art of the persuasion rhetoric. Especially about the contain of the message.
– I don’t try to. It is just that it seems to me to be the good decision. Otherwise every time we will plan to see each other you will have a dose of stress which will make you doubt. But the introspection will tell it to you as well as me… I am sure =)
– Nope in this case that is not at all about stress. Ah well I will tell you that. Sometimes that helps and sometimes not. Suspense!
– Yes
– Well writing did not solve my problem – at the same time it is logical – but I feel a little better.
– That’s fine! and in addition we are going to try to change your ideas:) see you later then

Two little words about this TEXTING-GAME: we apply the same rules by message than during a communication IRL. Namely: we use the same smiley(s) than her to create report. We show some detachment and we make her understand that we are a busy man. We oblige her to go in the rear and to assume if she really wants to cancel and we don’t let her force us into error. Important : never admit that we use processes of influence. Otherwise, I think that she was very put under stress and dreaded sleeping with me thus she was tempted to use any excuse to cancel. Certainly to test my motivation too. Why I accepted her whims? The reward was simply worth it there. If she comes, we are going to do naughty things. If the only reward was a coffee or a meal, I would simply have answered “too bad” to her first message. But I like this girl. Thin, cute, blue eyes, VIRGIN, respectful and motivated. A little bit strange that she chose me but she certainly wanted a confident guy who knows a minimum of things more rather than a fag half virgin like she sees a lot of it in her faculty of literature. Two virgins together, what an horror after 16.

She arrived at about 2 pm as expected. I then started to warm her in the lounge. Then cunnilingus in my bedroom. I asked her if she preferred to rise on me and to put it herself or if I put it to her, she told me to do it. Everything went well, she did not have pain and even took some pleasure during her first time. In fact, I had probably broke her hymen last time, I think that is why she had no pain today. Later we recovered from this effort by watching The Lion King 2. In the middle of the movie, I caressed her again then almost led her to the orgasm. I have taken her again, her small quite firm body excites me as much as the body of the cutie from Toulon (or even more). I really want to see her again regularly and to make of her one of my sources of affection. As would say Aurélien, it is “with the blood of a virgin” that I wrote these “devilish verses”.

Cherry on the cake, when she left, I photographed her.

Like Nico would say “for me it was a shitty week, so imagine what I think about yours”.

NB: I had sent her my long monologue about the dating sites in July.

Virginia had her first orgasm !

previousDiving in troubled waters
nextLife lesson : when I have been attacked by four fucking shitty assholes