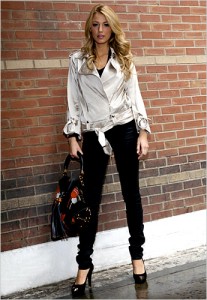 Sometimes you’re sit on the Cours Mirabeau with friends and sometimes tourists walk past you. Then sometimes, this group speaking English gives a look, and you don’t really know why nor how but you get up and you go there, unguardedly… Just like an obvious fact. Sometimes one of the foreigners is a tall blonde with blue eyes with a body just taken from Gossip Girl that leaves you speechless… Girls like that really exist in the real life ?! But you succeed in articulating some words and, in the course of the discussion, you find some common points (like the practice of the dickslap (just kidding)). She tells you that she is unfortunately going to go back to her country where people wear kilts the next day and that thus, it would be useless that she gives you her number.

Sometimes, you return towards your buddies and they are laughing at you (it is just that they would have liked having the balls to try their luck but did not dare then they pretend to be over that while they masturbate every night… so sad). For your part, you do not consider what has just taken place as a rake… seriously, too much ego is useless. Especially that, dramatic turn of events: the girl comes back to you, taps you on the shoulder and explains that, finally, you can see again each other again at the end of the summer because she is going to come back two weeks in Aix. Nice. The girl maybe wanted to see if you were going to be a needy guy who was going to annoy her or if you are a guy comfortable with himself who agreed to respect her decision whatever it is. But you do not really believe in it over the moment: you know that the promises of most people have no value.

What a surprise when, some times later, she calls you.  A hottie who is not begged, it is remarkable. Remark, it is not the girls comfortable with themselves who are the most difficult… I have the impression that The Game was created to make a sorting and allow us to seduce this kind of girls. Indeed, it teaches us to become more confident and everything but it is not the girls with problems who can appreciate to feel this kind of energy. It frightens them, intimidates them, makes them jealous, etc.

Date in a bar, at 10 pm. She is tanned, white dressed. Her low neck reveals you a breast like we only see it in movies and her tunic presents you two magnificent rounded legs. She acts more and more tactile, like if you had weeks to be caught up. Sometimes, nights promise to be hot… Then, you move in a club and your mouth is wildly assaulted by a bagpiper. Your jeans becomes suddenly too small for you, like if you had been operated to enlarge your penis. She drinks and dances, getting closer more and more. She arrives little by little at the ethylic point of no return. She makes funny comments “you have an angel’s face but you are the devil in fact”. She asks you to walk her back at her home. You walk straight ahead and support her in the street so much she is drunk, but are proud of you all the same to return a world-class beauty. She opens the door, and once at home…

I insist on this fact : she removes HERSELF her tunic, so finding herself in underwear. It is just when you unfasten her bra that she opens your jeans and kneels down spontaneously. Damned, what a blowjob ! The excitement due to her beauty makes it one of the best of your life. She suckes but doesn’t want to fuck, so, you go back home by realizing that your sperm cells are going to take the plane soon… When two badgers call out to you and take you out of your trance to piss you off “it was you the guy who was with the too hot blonde in the club, right?
– Yep.
– Fuck she was too hot. What did you do with her ? Did you destroy her fucking ass ?
– Just walked her home. That’s it.
– Ah OK I said to myself well that she was too hot for you. Can you give us her address? We will fuck her, we are not gays !
– But… she is not French ?
– No prob. I give language courses. »
You give a false address to these two bad-mannered jerks, by giving them a condescending smile. You did well: it is the only thing they deserved.

To return to Alicia, she will never answer your SMS post-blowjob… and when you will add her on FB, your attempt will find only a single echo « I am too much ashamed. I was so drunk. » I preferred her when she was shameless… End of story, one more who does not assume, nevertheless the embarrassment was only in her head!

The morality it is: dare, that leads to everything. Then that allows to make one crowned reserve of memories for your old days …