We are not identical 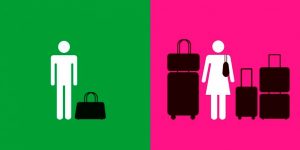 All our senses and all our daily observations show us that men and women are different. The most visible differences are clearly reflected at the physical level: primary and secondary sexual characteristics.

Intellectual differences are also notable. For example, the woman has a verbal intelligence far superior to the man: she will better understand the different meaning of a sentence. She talks more and not with the same objectives: it is found in every society that have been studied (universality of the influence of genes). Feminine intuition usually allows her to better understand the relationships between people: she will know very quickly who tries to seduce who, what is the emotional state of a couple, while that man will often not “see the matrix “.

In contrast, men are better in terms of visual-spatial intelligence: they dominate in tests asking to reconstruct an image or reading maps.

However, do not make me say what I did not say. We are not that different: we are more similar than different. One could compare the man and the woman with both word processing software each with special characteristics (such as Word and Open Office). Our similarities constitute 97% of our human nature: men and women have two legs, two arms, a body, a head, and our lives revolve around the same dimensions: personal, relational, professional and master. Our needs are essentially the same too: survival, to love and be loved, to flourish, to reproduce. Our fears too. In short, our brains have the same structures…

Men and women are similar but different. Not worse, nor better… just different!

The source of this difference is in our human nature, our genetic code, our atavism. All the humans share twenty-three pairs of chromosomes. Twenty-two pairs are identical: one, the sexual pair, is different.

The source of our differences lies also in our millions of years of evolution. The man always on the hunt, on guard, focused on his physical survival and the survival of his family, displaying ingenuity to stalk his prey, to do not get lost… All that makes a man and is etched in his nature.

The woman, often pregnant, living in the cave with the other women and children, having to learn how to live in a small space, anticipating potential danger, watching the fire, feeding her children from her body reserves, waiting for hunters to regain her strength, gathering all that is edible… all that makes a woman is etched in her nature.

The fairest conclusion is that men and women are not identical, they are complementary.