What a girl says, she does not necessarily mean it 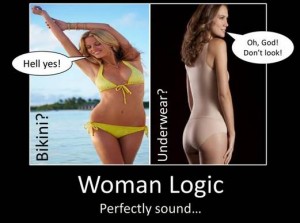 I had a good night,I’m drinking some tea and prepares a marriage proposal for Lola Le Lann. Suffice to say that I’m in good conditions to lay this little misogynistic text: What a girl says she does not necessarily thinks it. I give you her few funny examples of the famous “logic princesses” (which only makes sense for them and which is responsible for the fact that they drive us crazy sometimes).

1) I met this chick for the first time at a friend’s in Marseille. We drank, we went out and I warmed her in a club. Then we got back to Aix in train. In the station, she confessed to me still living with her parents and so I could not come at her place. I have proposed to go at my place or in a hotel but “I am not that kind of girl who will sleep anywhere with a guy met that same evening.” Instead, we made love in the lobby of a building that remained open. I even buried the condom in a flower pot faded (it gave them back the force).

2) I had invited this girl over but she was menstruating. We thus caressed each other a little, just for fun. I invited her again one week later to finish the job, she came and we did it. She decided to spend the night with me but complained of not having a change of clothes to go to work the next day because “I did not expect to sleep with you nor to spend the night here …” And my ass is some chicken, chick?

3) I had invited the girl to eat at my apartment one night. She refused, claiming having an evening with friends. She made a counterproposal: the same day but at noon, it was OK. We spent the afternoon together and fucked on digestion. Height of height, we stayed together the whole afternoon and she spent the night with me. What happened this party with her friends? “I had not really one, but if I had come in the evening, I came to sleep with you…”

4) I had pick up this girl in college. She had given me her Facebook and had made it clear that she had no phone so no number. I slept with her a few times at home before being invited to her place. I saw I-phone loading there she apparently never takes with her or hides deeply in her bag. I asked her why she had lied to me and she said “it is dangerous: there are plenty of people that cannot be trusted, so my friends have advised me not to give my number to guys because we do not know what can happen if we fall on a psychopath.” So: she lets a guy she barely knows making love to her, she spends the night with me at the first date and even asks me to slap her during sex but was not confident enough to give me herphone number because her friends told her to be careful of strangers. It is the pot calling the kettle back! I guess I’m gonna buy candy and distribute it at the exit of college …

5) I asked a friend living in Lyon if I could sleep at her place, overnight. She said she first had to ask permission from her boyfriend who would not be there. She added that she would feel guilty if she did not talk about it and many other stupid things about no breaking trust in her couple. It was OK for him. There, she offered me a disgusting deep-frozen pancake and sucked me. Before leaving the next day I have left a note to thank her for orgasm and attempted poisoning. I hope her guy will never read it…

Moral: if a girl resists once but that was we were good enough, it’s just a matter of principle or to piss you off. Do not give up but show determination. On the other hand, there is denial and REFUSAL: do not turn into clumsy insisting because you think she tests you while in factyou screwed up or she absolutely doesn’t like us (it happens – even if they would stand to gain by having sex with a respectful PUA and they would like it but they do not always realize it).

I do not think that girls resist better than us the sexual tension. Like a beautiful girl drives us crazy, I think that when she likes a guy : if he puts the pressure on the person with the ball he is often going to score the goal.

All this to say that we cannot really trust the first come girl, even if she is cute and even if we want to believe her, it is sad and that breaks the trust between men and women. It is necessary to know it to don’t count on them too fast all the same. That breaks my heart to say that but most of the girls are not reliable. Then I know guys out there who react by not being reliable neither. Or it is the opposite, it is women who protect themselves. In brief, it is the girl whose astrological sign is “snake” which died the tail.

For me the problem it is not even that the girls have only a mouth but nothing behind. It is that most of people generally have just a mouth and there’s nothing behind…

Game for you, according to your values !

#FabriceJulien, author of indecent texts but full of love