What do we do after the orgasm ?

I finished work earlier than planned this afternoon, so in order to spend time, I had a walk and approached two or three women in the street. It is a very healthy activity and it empties my… mind. Well, I was here just hanging out when  I suddenly started THINKING…

When I started studying seduction, I guess that my purposes were : quantity, quality, variety… I wanted to kiss a lot of hot women and to be blown in the night clubs of my town, I also wanted to doggystyle a new girl when I wished and especially I wanted to live exciting adventures with numerous princesses. I wanted to corrupt virgins, to bang married women, to try to pick up famous girls, to seduce students, working girls, middle-class persons, silly bitches, shy persons, gourmands, repressed naughty girls… In brief: all kinds to hotties and queens of sex. Among all these women, I planned to choose one that I will love for life. I’m not writing that because I am foolish, I just think about what Zola said « We have to love only one woman in our life, the one who loves us, and both we will live of this mutual love. »

How will I recognize her ? It is simple : thanks to her, I will not anymore want to see the others (fucking vicious circle). There is all the same a big fault in this reasoning … After a few times, when I will not have fun in the bed anymore with my one true love, what will I do ? Or if we have a kid and that she abandons me every five minutes in order to change his nappies? Will I call a prostitute or will I  try to pick up a girl in the street to calm my nerves ? In theory : no, I have to control myself, like for the alcohol, the drugs and everything … It would seriously damage the health of my couple and thus the mental health of FabriceX Junior. No way ! First of all, I don’t even know if we will live together or if I will take an apartment next to her home… According to Nietzsche « If the spouses did not live together, the happy couples would be more frequent. » I know that it seems stupid but why not thinking about it just two seconds in our life ? Still seems stupid ???

Now, fucking thirty or forty years the same woman, is it possible? Even if she ages and doesn’t work out ? Will also need to pass the step of the Viagra and everything because otherwise my Kiki will never be hard in front of grandma Lucienne. Seriously, we are not in The Young and the Restless « they met, loved each other, got married, had many children and lived happy till the end of their days ». All this makes me laugh : where is the ass there? And the game, the desire, the pleasure, the adventure, the risk… where are they ? WHERE ARE THE ORGASMES ?

In brief, I believe that I have just put the finger on an essential point (not the G-spot) : I adore making the girls laugh, I adore kissing them on their lips (all the lips), I adore touching their hips, their skin, their back, their breasts, the butts … I am also crazy about their caresses, about their bites/scratches and about their fucking cute smiles. I like that they take care of me, I also like leading them to orgasms and I like this bubble of complicity built just after the first time… When the last barriers of the intimacy have just fallen… Do you know what I am talking about ? I really love too much the women… Almost all the first times are magic for me, so, how can we live a sincere relation if we can sleep with a lot of women ?

In monogamous relations, we reach a huge rate of criminality between physical violence (knocks, wounds), psychological and verbal violence (blackmail, threats, rumors, insults, roaring) and sexual violence (rapes, touches, harassment) and more… The violence is in any case unacceptable if not granted («Constraint and love do not fit together, and we cannot control our pleasure » Rousseau)… And the divorces, do you wanna talk about the rate of divorces??? Finally, the problem is maybe the model itself which the society imposes to us : « The married life is simply a habit, a bad habit » according to Oscar Wilde.

So what ? A guy who remains faithful to his wife at the age of 50, he continues all the same to eye hotties in the street, to watch porn sites at night while his wife sleeps, to masturbate in the bathroom thinking of his young secretary and everything… We must not fool ourselves… Besides, his poor wife is eventually going to feel that she is not anymore good enough for him and will be sad. It is called frustration (not healthy relation). And, we all know where frustration leads… As a result, is it then possible to have the cake and to eat it too (and to fuck the baker) ? I guess that this question will stay without answer as long as we will not have experimented… (It is like the sodomy, we cannot know if we will like it before we tested !) On one side, we can say that the married guy is going to bang his girl because he is frustrated being stuck with her, on the other one we can say that in case of open-relationship he will knock her because she will have spent the night away from home. Then, the problem is doubtless deeper than that, it’s maybe the very nature of man.

I thus did, quickly, a survey via text messages : «If you did not want children and did not expect to live to old age , you would get married all the same ? The men answered NO for the greater part and the women YES. The model of the traditional couple is thus based on the needs of the fair sex and not on ours. Zebbi, it is nevertheless Eve who bet the apple, serious thought should be given to spank her. «Well, and if you met somebody whom you liked very much but you would know that after two years he or she will disappear forever. You would go out all the same with this person ? » Unsurprisingly, the girls answered NO and the guys YES. The majority of the men are thus more hedonist than the average of the women. Well, we want all the same to fertilize some eh, just to immortalize our genes. Except that, ethically, this kind of reasoning, is not seen as honorable. It puts us in touch with our animal side… We have to choose our side.

However, as human beings, we do not like the nuance : everything has to be white or black » (It is often not good when you are not wellthinking), but the truth is : the Universe doesn’t care… He does not judge. He only obeys the principles of CREATION and DESTRUCTION. And the seduction, as the life, contains a destructive part (more you will increase your power of seduction, more you will cause damages – man as woman I suppose).

Well, now, it’s time to confess. Why did I write all this claptrap ? I didn’t want to write about the pick up or the seduction and tell you that I am a model and that I am happy everyday and everything… Far from it ! I broke hearts, I made serious mistakes and stupidly missed nice doggystyles… But, feel reassured, I also got it up like never before ! That is what makes the understanding of gender relations worth it…

«It is a miracle that a man and a woman born to live together can live together! » Sacha Guitry was maybe not wrong about the apparently impossible reconciliation between the emotional and sexual needs of the men and those of the women. Not to mention the difficulties recognizing them and expressing them… Well, we will talk about that in details later !

Well, so, what do we do after the orgasm ? 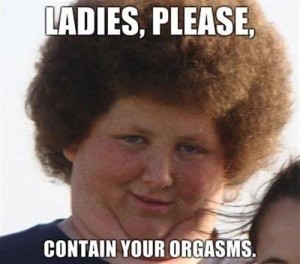