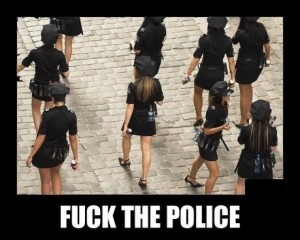 I received this text from the girl met at the Gala des Arts et Métiers.
“Tomorrow it’s OK for me.” (that we meet up and have sex)
“Okay I’m free from 7pm, tell me what time is good for you. Do you wanna have a drink at my place?”
“At about 8 pm so? Don’t you wanna go rather in a bar ?”
“Hmm yeah at 8pm it’s good for me. You want me to make love to you in a bar ???”
“Well in fact nevermind, forget me. I’m getting cold feet.”
“Lol. OK that’s awesome. You’ve already seen me, you’ve kissed me last Saturday and everything and needs to go back to the public place now? What’s the point ?” No answer.

It is often the same thing with women : It is chicken, weak, without any will. They prefer to stay in their comfort zone rather than to live a nice adventure… I find it saddening but it is a life choice after all ! Life choice that I don’t understand because I always prefer to give it a try even if it means making mistakes more often that in my turn. But so, the only person who will deserve a slap it is the other one who will get cold feet and not my image in the mirror of my Castorama bathroom. Let’s not forget that mirrors too often pout in the morning.

Finally, what quite a lot of people have difficulties to understand it is that the sorting is made by itself, between those who deserve my magic tongue and those who will never know it. It is not because I propose my divine seed that it is beforehand won for them, it is rather a good test to differentiate those who have a little “pluck” and those who will never do anything “crazy” in their life. Forgive this peremptory tone but it is true!

Personally, I am constantly led by the desire of discovery of a new body (it is a real drug I enjoy it) and the fear of losing this high-powered long hard cock (John-David is the name of my dick – 5kg without the balls – 1300 mega watts – when I’m getting hard it’s the beanstalk).

Fortunately, by logging on the world-famous cursed social network, I received a message from Misty (a buddy in Paris) that cheered me up. I share it with you because I find the end totally legendary. It a little restored my faith in humanity.

If you are not happy because you wanted to read one of my adventures, I challenge you to channel-hop. There are pictures of Laurence Ferrari naked who has sex with a horse on ADS thus go there, fucking Peeping Toms. Yeah yeah I’m taking to you the red-haired person who scratches his testicles take out your hand of your boxer shorts right now it is yucky! And to you too the nymphomaniac who phones to your friend the mytho to tell her with whom had sex this WE. Thus go sucking Sélim’s penis if you are not happy.

“ It’s been two-three times that I date Marie, this young blonde with a thin body and with a sexual ardour that I had never known previously. You thus easily understand why I like this girl. Every time her tiny ass crossed the threshold of my home, I knew that the pleasure party was going to be really nice.

As a reminder, we had kissed each other during a party at a buddy’s. After two-three kisses, the temperature quickly rose (the alcohol had already warmed us, then we didn’t need much more so that we want to mutually touch), and as a result, we found ourselves in the bedroom of my buddy. After a fast passage of my hands on her legging, I went inside, grasping in full hands her buttocks and slightly pulling her string. She could not handle more tension, then she decided to go down to please me, alone, like a woman. Stuck to the door making me suck, my buddies began to ask themselves questions and tried to open. I had the presence of mind to lock to avoid that an unwelcome visitor comes to steal us this precious moment between two human beings in total sexual connection. Except that my buddies, these suckers, began to bang the door, until one of my buddies who knows Game told them to go away. Unluckily, that cooled us. We thus decided to meet up again, and the next time, it was sooo hot !

For this Friday night, I was partyless. No plan, I thus unsheathed my smartphone to see Marie. Only the idea to see her again was enough to give me a beginning of erection. Luckily, she had nothing to do either that night. The problem, it was because neither her house, nor mine were free. As a result, I told her that we would improvise. Having driven until my home with her car (about ten kilometers all the same), I jumped in her car and we found ourselves in the small recess where we had stopped the first time we had sex in her car. Between a zone of works for a national and a sports complex, just behind a small low wall, she parked, and we fell over on the back seat. We started soft: little kisses, petting, contact with the fingertips … No I’m kiddding, it was wild.

I was just on the back seat that she jumped on me (technical exploit seen the available place), removed her top and I began to touch her tits by kissing her. In passing a hand in the back, and the other one on her attractive bent buttocks, I felt her very hot. She took off my pants with so much envy that just this fact alone could have made me hard. This girl is so much endowed for the preliminary that I had to excite her as much as she had done for me. I thus lied her down on the seat and I licked her until I feel her leaving her body. Then, still hot, she began to ride me, while pressing my hands sometimes against her breasts, sometimes on her buttocks. The desire to take her doggy-style naturally appeared in me: I turned her around, caught her buttocks and penetrated into her rather hardly. Windows had become opaque because of the vapor caused by our romps. We continued during tens of minutes until we perceive lights coming from the outside …

I lost my erection right away. She was afraid, and a voice of man came from the outside of the car: « Police, go out of the vehicle »

She freaked out like crazy, and I was not very reassured either. Still trembling because of the sexual excitement (or because of stress), I put back on with great difficulty my jeans, my shoes without socks and I went out by putting back on my t shirt, followed by Marie. « ID cards please. »

We gave it to them. And then :

Policeman: « Hmm ok. Well, we know what you were doing, but here it is a private place, it is not public. There are cameras here, watch out. Next time, get a hotel, or go to your place.

Policeman (talking to me) « Did you finish your affair ? »

They left, and we stayed there, outside in the cold. Holy shit! I still trembled! And I still wore the condom! It was really a funny situation when I think about it. Marie told me that we were lucky and I laughed. She said that she did not well put back on her string and that it is back to front, haha.

In spite of that, the sexual excitement had totally disappeared, and impossible to be hard correctly after the savage sex and the funny event of the weekend.

She drove me back home, and left back direction her place after two-three fags and a little talk.

May the God of the Game spares us all police custodies.

previousShould a girl sleep with a guy on the first date ?
nextBad boys’ power of attraction explained