When you will be fed up to with being with your friends, come to see me 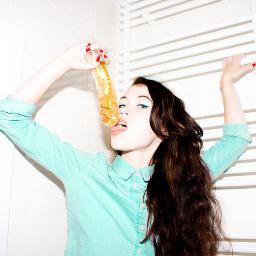 On Monday, I had to go to the LMDE to renew my student health insurance. On the spot, I took the ticket number 25 while they called the 14. I thus waited during almost one hour ! To kill time, I looked for a bullshit I could do with my cell phone… I sent some jokes to buddies, wrote obscene things to girls and suddenly thought of a friend to whom I speak again on Facebook since five or six days. I had met this girl when I was in a relationship and, strangely, she didn’t really liked the fact that I have a girlfriend so we didn’t go farther. I suggested meeting her at about 4 pm.

We had a drink in the bar IN FRONT OF MY HOUSE (I had no idea in mind), it was cool. She had a black pullover which tempted me to pass my hands below and a jeans which made her look good : I am sure that she lost 8 or 11 pounds since last year … Cool, I was right to wait! Her family eats at 7 pm so at 6:20 pm I walked her back to her bus. Because it rained, she protect me under her purple umbrella (everybody has a defect). On our way, I put my arm around her size, she seemed to appreciate. She told me that I was too much tall and that she had to hold her umbrella too high so I took it and I put it only over me, to tease her. It was really the first time that someone told that I am too much tall, it is her who is short in reality, I guess she is 5ft3 even a little less … In brief, her bus was going to leave so I just gave her a kiss then sent the ritual text message « I am sure that we can do better than that.
– Yes, for sure !
– Cool, next time we put the tongue.
– Ah well, yes of course.
– Saturday? » Because we had spoken a lot about movies, we agreed to go to the cinema.

9:30 pm on Tuesday, Comme des frères with friend Nico Duveauchelle. This movie is nice but is not worth 9€ unless we can take advantage of it to touch up a friend. Fortunately, we caressed during 1h48. Anecdote, there is a passage which takes place in Aix where the heroes park place des Augustins (forbidden access by car in reality), circulate in the pedestrian streets, it’s a shame. Other incoherence: they walk Rue de la Verrerie, turn an angle and arrive on the Cours Mirabeau. I noted others but I forgot… Anyway, it bothered me that they present Aix by night as a boring and dead city while it is cool in really. 11 pm, at the end of the movie, she seemed to be in a hurry to go out. On our way back, we arrived at a crossroads « Hey, where do you go, it is there that I am parked.
– Yeah but it is there that I live.
– You do not walk me to my car ? :(
– Are you sure that you want to leave now ?
– Yes because tomorrow I have sport at 9 am and I am tired and blah blah blah » I didn’t insisted, anyway her decision was already taken : she did not want to be seen as an easy girl. She wants me to desire her. I agreed to play the game, but no more three dates, she should not exaggerate, there are limits to everything. At the moment, I practice a lot the pickup in two phases: have a drink + at my place. But in three steps it is correct too… If I had insisted heavily, I would have lost my value because I would have passed in mode needy. In this case, I remained imperturbable and it is her who wondered if she made the right choice. Well, I turned her on in the elevator of the parking, then against her car, so that she thinks about it all night long and does not resist the next time. « Good night, my cat.
– Miaow. No, I will go out I now. » She was surprised.

Arnaud had proposed me an aperitif at his place with Hafid : I didn’t see them for a while, so I was interested. We talked about ass, about piercings to the tongue and other fascinating subjects like Nolwenn Leroy. Hafid texted with girls, so we joined them in a bar.

I opened some sets there by introducing me as Batman to girls who wore ears of cat (Catwoman), I asked a chick who came back from the changing room why she had not left with it her other clothes and I made other jokes which show that I am a really mature guy !

I am in my period of « contextual openings », for example later in a club, in the queue of the changing room girls danced and passed people. I asked them if it was the dance to pass people easily, they answered me yes, then I asked if I could play with them, and they answered yes again. Later, a girl had some vapor on her glasses so I teased her. Having said that, in the club, once the opener past, I did not feel exhilarated. I even felt like powerless. As a result, with Hafid, we went out to get some fresh air and we went to the club on the opposite side, just to enjoy a new start.

We have stolen glasses on the counter then we went next to the bouncer so that he believes that we consume expensive things. Me, I didn’t drink alcohol for 15 days, I want to try during at least one month the food method I read in Unlimited power (the principle is to wash your body of all the shit which we gulp down daily, to have more energy). We then positioned in a stopping-off place just to make eye contacts … Later, Arnaud joined us and pushed me to approach. Arnaud is very cool because he is always ready, always volunteer and never demotivated. He is cool, I didn’t want to disappoint him. As a result, we started hunting there.

I passed in front of  a group in a corner where the music was not too loud then I tried to hear what a girl said when I saw that her friend was looking at me « I try to understand what she says…
– She tries to reject this guy but with 10 drinks in the blood it is not easy… » I observed during the time she talked to me that she had totally turned the back to her group, had bent towards me and had crossed her feet (wanted to stay). We spoke a little, intense look, then her friends left and she left too with nevertheless an hesitation. Hafid asked me « what did you do ?
– I dunno. » As a result, when I saw her again I told her a funny and cocky thing « When you will be fed up to with being with your friends, come to see me.
– When you will be fed up with being with your buddies, come to see me.
– I’m fed up. » But she left again with her friends.

« Fuxelife, I understand nothing » I said to Hafid « I am going to try my luck for good.
– Well if you kiss her, I leave, I’m tired ». I didn’t think that he would do it so I went back to hunt. I saw her, and with a sign of the hand I asked her to come (I love doing so). She did and surprised me « I looked for you…
– Me too. What’s your name ?
– Marine.
– Marine, I will tell you a secret… some people say that I am a good kisser. » Believe me or not but she broke eye contact and started leaving with this facial expression « what’s that ? An idiot?! » So I caught her by the arm to explain her that it was more a joke than something else and kissed her without debate. The problem was that we didn’t have a lot to say to each other at first, then I decided to stop talking, to oblige HER feeding the conversation (to show her interest) « What do you do for a living ? ».

After a while, she decided to go out to smoke. I accompanied her and once outside, we better spoke. I discovered that she is very funny and very nice and everything. She wanted to go back home because it was like 4 am but I told her that we could go back to the warmth in the club at first. There, I turned her on, she raised the leg spontaneously then I made comings and goings to excite her. You are so delicate, Fabrice. She then showed an infinite wisdom « anyway, it is not my job which is going to change the world.
– What do I have to understand ?
– Understand that if you look for a place where to sleep, I live at 2mn30… » I had to think about it because I balanced the pros and the cons : at my place there were condoms / but it was not sure that she would want to come. Then I decided to do not take any risk and to go to her place : it is always better than going back home and masturbating.

She told me that I was the first male to come at her home since she move to Aix (at the end of August). As a consequence, it was strange that I penetrate there so easily, well, it was not the moment to ask too many questions and maybe she was just in lack of sex. Her cat adopted me right away (like all the cats). She had condoms « the sensation of wearing nothing », I tested it and I concluded that it was better than the condoms I usually buy. We did it 4 or 5 times. So, I had all my time to learn more about the princess.

A blue-eyed (but not insipid eyes) brunette : she looked a little bit like Misha Cross (it seduced me), big tits which persuaded me wrongly  that she was a little bit fat while she has a flat stomach. She looks to have a lot of money, so cool. She practices taekwondo, so I have to pay attention to what I say… One more who smokes after making love (it is because I too much make them warm I think). By leaving, I gave her my Facebook and she just added me as a friend. We can meet again, it was nice.

Otherwise, at the moment I talk to my neighbor by text messages : she is sexy and has a mystic side which excites me a lot, like if she could unzippe my pants by the thought. Well, I have a date in the afternoon, we’ll see. And to finish the list of the festivities, a buddy gave me an account AUM which still works for free… God bless him (and may the god of the Game be with you) !