Why does she fake orgasm ? And why ? 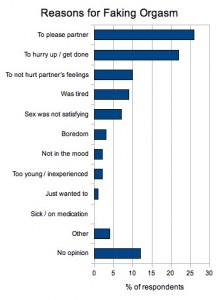 A fake orgasm is the result of a person who pretended to have an orgasm without actually experiencing one. It usually means simulating or acting out behaviors, such as body movements, vocal sounds, and sequences of apparent intensification followed by apparent release, typically associated with orgasm. It can also include giving verbal indications that orgasm occurred.

Contrary to popular beliefs, women are not the only gender to fake orgasms. A random-sample telephone poll of 1,501 Americans has shown that 48% of women and 11% of men faked orgasm. Faking orgasms in men becomes easier while using condoms, since ejaculation usually accompanies orgasm in males. Women fake orgasms much more frequently than men with 26% of women faking an orgasm every time they have sex. This is more than the 25% of women who report consistently having an orgasm during sex.

Orgasm is not always achieved easily during sexual activity. In both sexes, the condition of being unable to orgasm during sex is called anorgasmia ; it can be caused by a variety of factors, including factors in one’s life such as stress, anxiety, depression, or fatigue, as well as factors related to the sex itself, including worry, guilt, fear of painful intercourse, fear of pregnancy, the undesirability of a partner and the undesirability of a setting. It can also be caused by drug use, including alcohol and other drugs, or side effects from prescription drugs.

People can fake orgasms for number of reasons, such as when their partner wants them to orgasm but they are unable, or when they desire to stop having sex but are not comfortable telling their partner directly, avoiding negative consequences, or for pleasing their partner.

For women in a heterosexual relationship, faking orgasm is often based on deference to the man, need for his approval, or feelings of shame or sexual inadequacy. People can also fake orgasms for reasons of display or presentation, such as during phone sex or in pornography.

Women tend to achieve orgasm during sex less readily than men, and thus faking an orgasm is more common among women. Most women require direct clitoral stimulation to achieve orgasm. Not all sexual positions provide access to the clitoris, thus making orgasms difficult to achieve for women during sex.

Feminists have pointed to women faking orgasm as a sign of male-centered sexuality; in a society that celebrates only male sexual pleasure, women may feel pressured to engage in acts that bring their male partners to orgasm but that do not provide them physical pleasure. Women in a discussion group in 1967 analyzed their motivations for faking orgasms and decided that faking was a response to pressures placed upon them by men. As such, the urge to fake an orgasm often sits in a broader context of other problems with sexual repression or male-centered sexuality. Many of these women also experienced feelings such as sexual rejection by their partners, or on the other hand, unwanted sexual attention; some were afraid to tell their partners what they wanted, and others said their partners resented being told what they wanted.

Hugo M. Mialon developed a game theoretical analysis of faking orgasms as a signaling game. Only some of the predictions of his model were consistent with survey data used to check the validity of the model. Among other things, the survey data suggested that both women and men who would be more concerned if their partner were faking are less likely to fake themselves, and that older women and men are more likely to fake than younger ones.

One study of orgasm found that women who fake orgasms were more likely to neglect their partners and flirt with other men at social gatherings; the authors of this study speculated that women who fake orgasms may be more likely to engage in sexual intercourse with men other than their partner, although they recommended caution at interpreting their findings due to a small data set and a large number of variables being studied.

In therapy or counseling, women are more likely to inaccurately portray their sexual behavior (such as by claiming to orgasm when they do not) to a male therapist than to a female one, although women may still withhold the same information from female therapists.

Extract from : The awesome lover’s manual

previousThe initiatives in the bed
nextGood sex is the solution