Why she is not sleeping with you 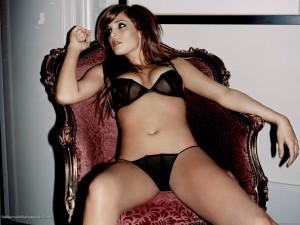 This article has been written and translated by Virginie.

Today I’m going to speak to you – well, OK, it’s Fabrice who gave me the idea of the subject – about girls who have a big mouth but who, when things become serious, reverse. Roughly, they speak about sex (sometimes are even more trash than you) but when comes the moment to take a « last drink » at your home or at her home, there is no longer anyone. Nor even to agree on a second meeting.

To place it chronologically, it would be later than a flake, you have already begun to discuss, but before the last-minute resistance.

Do not expect that I give you the miracle solution so that this kind of situation doesn’t occur, or to by-pass it. I would be very incapable of it. What I can try to do, on the other hand, it’s to explain you why us, girls, we act so. Of course, there are heaps of reasons and, every person being unique, they will not be the same from a girl to another one. However, it will help you, maybe, to understand a little better the reaction – even to anticipate it, if you are really hardly – and to accept it without feeling you too much affect in your ego of male.

Why a girl would agree to speak about sex, would show herself very open verbally speaking for, in the end, prefer to sleep alone ? I’m going to draw up you a non-exhaustive list of certain explanations.

– Fear of « what they will say ». In a general way, a girl who sleeps on the first date, it’s badly seen. I don’t say that this point of view is justified. But it’s that the majority of people – as well girls as guys – thinks. The guys maybe a little less, but, generally, the girl who sleeps with them on the first evening will more be considered as a one-night stand than as a potential girl friend. And, that, the girls know very well. And they don’t want this status. Being just « one among so many others », it’s not really our drug. We like feeling unique – who does not like it ? Thus, even if it can create some frustration at the time, many girls prefer to be held in the word, it is less risked for their image.

– Fear of being « used ». Roughly, that the guy uses her for his own selfish pleasure and that she takes none. I didn’t sleep with enough different guys to realize the average level in the bed but, according to what I heard, those who are really good (and thus generous) in the bed are rare. Thus, once more, even if it can create some frustration, be held in the word is a way to avoid risking to feel it even more.

– Fear of going out of our zone of comfort. It’s true, the oral words are abstractions. Nothing concrete or definitive. We can always return on what we said. While acts, them, are much more captivating and it’s much more difficult to reverse. Thus agreeing to do something that we are not used to do, it’s all the more difficult. The unknown frightens. At least, we learnt to be afraid of the unknown – the parents repeat not to speak with the unknowns, among others.

– Because we are formated since our earliest chilhood. What type of story do we tell the girls ? Fairy tales, where the poor princess (who is not there one yet), having undergone numerous injustices, meets finally the charming prince. And it’s immediate love at first sight. The prince does his best to conquer her and deserve her love – yes because it’s necessary to deserve us, even if before we were just a poor girl who did the cleaning for our cruel mother and our half-both unbearable sisters (I hope that everybody recognize that I hinted at Cinderella otherwise, shame on you and immediatly go to revise your classics !). And, may we like or not this kind of stories, they influence us, more or less consciously. Then you understand well that sleeping with a guy we met in nightclub, it is a little bit away from this scenario. And by growing up, we continue to be formated, by the media and the press. How many girls’ stories raped by a guy met one night did we heard ? This fear is not unimportant, but it depends partially on the city (for example, the distrust will be bigger in Marseille than in Aix). Regarding formatting, there is also all the « gossip magazines ». Certainly, the setbacks and the breaks sometimes hit the headlines but we can more see the « perfect » couples. Like Brangelina or, still some times ago, Depp-Paradis. It’s influencing people, seem to live the perfect life, professionnaly as personnaly. Then, except what magazines tell us about the « stars », they are also filled with pages « love », « seduction », « couple », etc. I read once in a blue moon but I have never seen the advice to sleep on the first evening. Rather, the opposite. And because Closer or Biba know everything, we follow their advice. Especially when they are accompanied with testimonies, thus, it strenghtens their credibility.

– Because it’s not in accordance with our education. As I wrote earlier, we are conditioned to be wary from each other – great atmosphere ! But there are also all the moral or religious values our family passes on to us. Without going to the extreme of the ring of purity, certain girls can feel really dirty or immoral if they give in first evening. The parental pressure can be very heavy for some. The « friendly » pressure has some weight too. For example, I know a girl who did not manage to keep for a long time her boyfriends. As a result, she asked one of her friends – who is in couple for several months – how she did. Answer : waiting 3 months before sleeping ! More than 90 days ! (hang me !). In the end, the girl  says to herself: because that worked for my friend, why not for me ? Certainly, the pressure is not the same that with the parents. But, between girls, it is so much more beautiful to tell that our boyfriend courted us (romantic restaurants, jewels, flowers and chocolates) to seduce us rather than to say that we slept with him after having discussed 10 minutes in a nightclub.

Paragraph added by Fab: but how can they hope that a guy is going to wait 90 days before sleeping with them? Or the guy is a desperate person so ready to anything for having sex or he is going to sleep with another one (and lie) while waiting. In both cases it is the girl who loses there. The girls would thus be attracted by badboys while saying they want (or by forcing to have) a Nice guy for their image? Will they sleep with a PUA while making their charming prince wait ? ;)

– Because it is an idiot who understood nothing in the life and who believes that everything is due to her. Oops, I didn’t mean that…

Here we are, I more or less went through the reasons which can urge a girl to don’t want to go farther with you. Generally, there is several at the time (hey yes, us, the feminine gente, are complex and mysterious beings – and especially headache, but it is what makes our charm). If ever you see other reasons, don’t hesitate to indicate them to me in a comment.