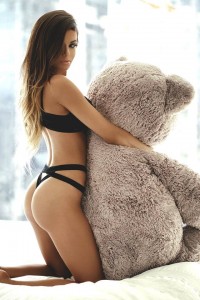 I want to write an article to clarify the situation to my readers about female orgasms. What to think? What to expect ? What should you know? Not that I am God and that I know everything, but I do have some experience so I’ll tell you what I observed. Feel free to leave a comment to flesh this knowledge!

1/ I start with a typology of women reaching orgasm by the time they need:

A. There’s those who enjoy fast

It is a case not unusual but this is not the most common, either. I often encountered this case among virgins I had trained to enjoy. You lick three minutes or you penetrate during five and they enjoy. Chicks must know how to orgasm, be comfortable and have some knowledge of what they like and how. These (lucky) girls can have a lot of orgasms during a normal sexual intercourse, like 3 or 4 and up to 7 or 8.

Orgasms are not necessarily less powerful than for those who take longer to enjoy. It actually depends on several factors like their mood, their health, fatigue, etc. But let’s remember that in good conditions: they can have very huge orgasms quickly if enough excited! Love can help to orgasm too.

They may not enjoy at all if the guy is really bad. It was the case of Virginie with another dude than me… he a little discouraged her. The poor girl ! In short, so it does not happen to you: cf. The awesome lover’s manual

B. Those who enjoy after an average time

C. Those who take a long time to enjoy

Chicks who have difficulties to enjoy often struggle with all their partners. I know you would think it’s because I’m bad in bed but I banged enough chicks and I made enjoy more or less 90% of them so I know what I’m talking about. Sometimes it’s not your fault: they are just “hard to come.”

D. Those who are unable to let themselves go enough to exult

Sex is still good for them. But they fail to “let it go”. I do not voluntarily speak here of girls who cannot have orgasms but I’m talking about girls who could have but do not (99% of women who never orgasmed).

Among those who have never enjoyed despite an active sex life:
– A man never gave them enough pleasure;
– Or (and this is most often the case) they have a mental block or fear of the unknown (they do not know what awaits them if they stop controlling). Typically, these are women who like to be in control (not especially in bed but in their everyday life).

They are never “really” satisfied, they constantly want more. They are a little discouraged, some are wondering if they have a problem. They need YOU !!!

Helping them let it go is difficult. But do not drop the case. Find out how she likes it the most, bring her to the brink of orgasm (her limit) and talk to her, reassure her, encourage her, what do I know… I unlocked a few like that, with perseverance and understanding. Of course, I had put them before in a comfortable position, like on a bed, not on a washing machine !!! Sometimes you will have to see the girl several times before you succeeding.

E. Those who ejaculate

On the other hand, after 15 orgasms, they are exhausted and spend a good night!

2/ I continue with a typology of the orgasms they reach :

A. The orgasm that rises suddenly and orgasm rising slowly. It depends on how she is taken, and on her state of mind.

B. The light orgasm, orgasm and moderate powerful orgasm. It depends on how she is taken, and on her mindset.

C. The orgasm that fills and orgasm that makes her want to have more. We, men, have a tendency to be emptied after an orgasm but with women it’s different: some are knock-out and cannot continue sex, others are boosted and are drugged until they fall asleep (or their legs do not support them anymore). In some women the clitoris is sometimes too sensitive after orgasm or during the first stimuli: fortunately, it doesn’t last!

E. The G spot, the clitoris, the deep spot…

I read a lot of studies on the questions: vaginal or clitoral women? What I think it’s that this is more or less nonsensical: the clitoris and the G-sport correspond in fact to the same thing. They are the two ends of the same pleasure center.

Most of orgasms are actually a mixture of both. I like licking/fingering, it’s the ultimate combo. But what is most stimulating and helped her releaseing? Some are easier to enjoy by one side than by the other. Often you’ll need to do both if you do not want to spend the day there…

Apparently the feeling of the orgasms is different too. There’s not necessarily any that is better, it depends on people: just that sometimes it is more difficult to achieve at one end than with other one so it is perhaps more liberating (enjoyable) when it happens. But most girls are still clitoral even if I use the combo of the two stimuli.

F. Other types of orgasms

Sometimes there are chicks that get enjoyment just by being rubbed over their clothes.

Whatever the politically correct people and the ignorant say, I believe the number of women that touch themselves all alone is about 4 over 5. At least 50% of young people regularly do it, like 3 or 4 times a month. About the old women, I do not know, this is not my category. But I think it decreases with family life and menopause.

Inevitably, we know our bodies so it goes straight to the point… but we are deprived of anticipation, feminine energy and all that makes the true power of pleasure and satisfaction. For women it’s the same : a sextoy is not a man.

In conclusion: is it better that they have a strong orgasm or a lot of little orgasms ? Who cares if they are satisfied, in fact, but I would say a strong one.

It’s been a while I had not talked about sex like that, so if you miss it, feel free to read The awesome lover’s manual !

previous10 details for selecting my targets on Adopt
nextHow to cut your beard in the classy way?