You have to understand that women are like men 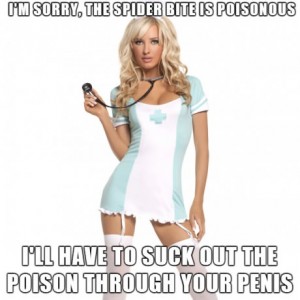 The reason why humanity is divided in two sexes (men and women) is in order to be able to combine our genetic materials (genetic mixting) and facilitate the evolution of the species.

Women are men (and vice versa)

Women love sex, almost as we do. They want that we take our pants off and to take as quickly as possible our sex in their mouth.

Men and women can feel the same kind of sexual pleasure. It is even possible that women can have more pleasure than us during the act : they have more nerve endings, can enjoy several orgasms in a row, etc…

You can do this funny exercise : next time you will see an attractive pair of tits, note the pleasant sensation it gives you. Pay attention to the feeling in your body. Well, they feel the same thing when we excite them sexually. We are the same. QED.

The biggest secret of the world

Nevertheless, nobody will admit it, because of two reasons:
– The men need an illusion of purity (more details later) to feel loved ;
– The women use their supposed purity to urge men to make a commitment.

The incredible thing it’s that both sexes seem happy to live this lie.

But the truth is that women like being dominated in bed. Their feminine energy needs your male energy. They like the fact of making you ejaculate. They adore touching and licking our butts. Women are men. Women are like us. The sex and the dirty things, it really turns them on.

If you want to seduce women, you have to begin to see the world this way. Do a little bit like if you tried to pick up yourself.

It’s funny to realize that the homosexuals are more honest and more direct than the heterosexuals … But, finally, as two guys gays : men and women only want to fuck.

Replace SHE by HE

Women, between them, speak in the same way than guys do : they discuss about who is a good lover, who they could bang, who is handsome, etc. In girl’s language, all this is translated by « Which sex I would like to have in my vagina tonight? ».

On the other hand, they do not use the same words than us to communicate their desires. But do not let them mislead you with their cute voices, long hair and beautiful eyes encircled with black.

Women are as excited as we are by the sex : women are like men, at least on the sexual plan.

Instead of trying constantly to repeat that women like the sex, repeat simply « women, like men, love pleasure ». After all, it is a little that, the purpose of the life : avoiding pain and looking for pleasure. And isn’t sex one of the most pleasant experiences of the world ?

Replacing the word « sex » by the word « pleasure » facilitates the things, when it come to the understanding of the opposite sex. For example, « women like more the pleasure than men ». It is now ridiculous to listen a woman claiming that she does not like the pleasure. Honestly, women like men, go out in the evening to feel some pleasure.

The women are too happy to be able to play this role because playing the frightened virgins allows them to satisfy their biological priorities (that is to say : finding a guy ready to make a commitment in order to have children before the hour of the menopause rang).

You want her purity ? Except that the only guy who will enjoy her exclusivity in peace will be the one who will marry her and will make her faithful. Except that, women do what they want of their body, then stop pissing off your girlfriend with her past adventures !!!

A girl is just a human being, and to be ceaselessly treated like a fragile princess can be very frustrating. I think moreover that the most beautiful women are not the one who are best fucked. They impress too much men so that they can be good in bed…

Think : even if the body of a woman makes us a lot of effect, it is just a body. We are turned on by legs, breast, pubis … By a ass which you would not know how to distinguish from the one of a man if I had shown it to you in close-up. I do not try to kill your libido, but I think that even if the girl is really really hot, it is just her feminine attributes which excite us : She pisses, shaves, transpires and sometimes stinks, just like a man … Nevertheless, with the women, it is the frenzy « Fuck me like the bitch that I am but also offer me flowers because I am very cute and because I have beautiful eyes which look like fucking diamonds. »

I think that rap is the most realistic kind of music, I mean when it is about sex. Listen to Orelsan or Seth Gueko, they will probably fix you. Such an electric shock !

When you will FINALLY look at men and women in the same way, you will have understood everything to sex. I don’t say that you have to become bisexual : I’m just saying that when you fuck a girl, the truth is that, she fucks you too. She uses you the same way you’re using her. Then, why do you want to go without ? It’s a win-win scenario.

If my words shock you or whatever, know that I am not specially a sucker, tt’s rather that YOU are too much moralistic, than YOU have no critical mind and that YOU live completely away from the reality. Indeed, when honest women complain to me that men are liers, manipulators and perverts, I answer : « you, women, are worse than us ». They always agree.